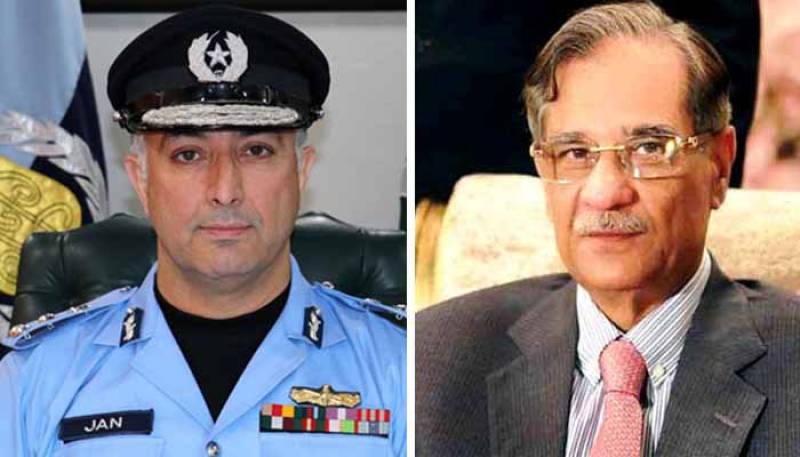 ISLAMABAD - The Attorney General of Pakistan (AGP) has said that IGP Islamabad was transferred on the directives of Prime Minister Imran Khan.

Later, the Supreme Court of Pakistan suspended the notification of the transfer orders of the top Islamabad cop.

Chief Justice of Pakistan Mian Saqib Nisar took notice of transfer of Inspector General of Police (IGP), Islamabad, Jan Muhammad allegedly after refusing to take action on the complaint of Federal Minister Azam Swati's son and failing to pick calls from the minister.

During the course of the hearing, the interior secretary and the attorney general (AG) were directed by the apex court to explain the reasons behind the transfer.

“I have heard the transfer was done on some minister’s order. The interior secretary should inform us why he was transferred,” the top judge remarked. “We have also heard that IGP was removed because he refused to obey orders of a minister’s son,” the CJP added.

“We cannot tolerate political meddling in the police. Governance of law should be maintained and we will not let our institutions falter,” Justice Nisar said, adding that there was also a transfer in Punjab and this transfer happened within a matter of days.

“The attorney general’s office should also provide a report on this,” he added.

“Tell the interior secretary to provide the record for both police officers. The rules were fixed in the AD Khawaja case,” he said, adding, “Tell us when he [the Islamabad IGP] was transferred.”

CJP Nisar said that hearing over the matter would resume after the Interior secretary arrived. However, the CJP expressed annoyance when his appearance before the court was delayed.

“Should the court wait for you?” he remarked.

The interior secretary, soon after arriving at the court, said that the decision to transfer the IGP was taken by the Establishment Division. The CJP inquired under who’s jurisdiction Islamabad Police fell under.

“The interior ministry,” the secretary answered.

“You have no idea that the IGP under you has been transferred,” CJP Nisar remarked. The secretary responded that he was not consulted in the transfer process.

“Attorney general sahib, if you were aware that the secretary establishment was behind the transfer, you could have called him too,” the CJP said. “Should we now sit and play Ludo while we wait for him to come here?”

The attorney general requested the court to postpone the case but it was rejected with the CJP directing establishment secretary to appear before the court by 3:30 pm. “Ask him to bring the transfer file along with him,” the chief justice added.

After the establishment secretary appeared before the court, the attorney general presented a record of the Islamabad IGP’s transfer. “The Islamabad IGP was transferred on PM Imran’s verbal orders,” the AGP told the court.

The chief justice then asked, “On which minister’s saying did the prime minister issue verbal orders for the IGP’s transfer?”

“We will not allow the country to be run like this,” Justice Nisar asserted. “The country will not be run on somebody’s directions but as per the law,” he added.

“Is this Naya Pakistan?” the chief justice remarked.

During the course of proceedings, secretary establishment submitted that Prime Minister Khan was not satisfied with the performance of the IGP to which a member of the bench, Justice Ijazul Ahsan, observed that if competency of the police chief was in question then instead of terminating his services, why the transfer was done in haste.

Secretary establishment apprised the court that transfer of Jan Muhammad was not being carried out in haste, saying that the transfer was a part of the ongoing plan.

Suspending the notification regarding the Islamabad IGP’s transfer, the court adjourned the hearing of the case till tomorrow. The court also directed the secretaries of interior and establishment to submit their affidavits by Wednesday and appear for hearing on Tuesday. The attorney general has also been summoned.

Swati said he had made several attempts to contact the inspector-general to inform him regarding the incident and ensuing bomb threats from the “illegal occupants” who later beat up and injured his three guards.

The interior secretary told me that he had been trying to get in touch with the inspector general himself for several hours but was unable to do so, Swati said while talking to a private media outlet.

“When I got in touch with him [IGP] on Thursday at around 6:00 pm, even then he did not do anything, as a result of which three of my guards were injured. Are they not citizens of Pakistan? Will the law of the land not be implemented here?” he asked.

The minister said that his guard was told that “you and your Khan would be eliminated in a bomb attack”. I then informed the DSP, SSP, and then the IGP Islamabad.

“Even after 22 hours, despite several of my calls, no action was taken and three Pakistani citizens were injured,” he said.

Swati said that his wounded employees were still admitted at the PIMS hospital.

“They will testify before the law. The onus of failure in protecting them is on IGP Islamabad,” he said, adding that he will also pursue legal options.

I will appear before the chief justice in the court myself and narrate all the facts to him, he said.

Swati further said that he had sent a text message to Prime Minister Imran Khan besides submitting a written application with the Interior Ministry, Prime Minister’s Secretariat, Senate chairman and the leader of the House.

On October 27, Islamabad IGP Jan Muhammad was transferred and ordered to report immediately to the Establishment Division until further orders.

Reports stated that the IGP was transferred after he refused action on a complaint by Swati’s son.

Swati’s son filed an FIR at the Shehzad Town Police Station against several for allegedly letting their animals into the former’s fields. On being stopped, the suspects attacked the employees with axes and also snatched weapons from the security guards and held them, hostage, the FIR stated.

The government’s Fake News Buster Twitter account earlier denied the reports that the IGP was transferred for not picking up Azam Swati’s telephone calls.

A Ministry of Interior spokesperson said that a summary for the IG’s transfer was sent to Prime Minister Imran Khan three weeks ago but could not be approved owing to the premier’s busy schedule.