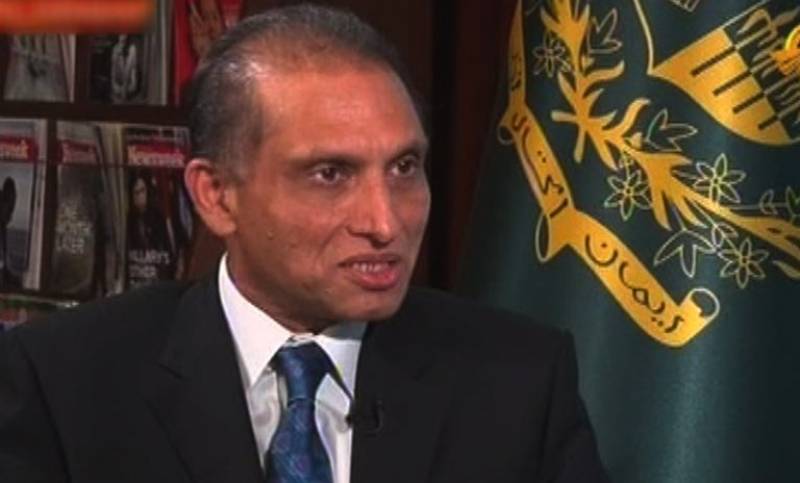 WASHINGTON - Blowing off former Pakistan's High Commissioner to India, Abdul Basit's rude comments, Pakistan's Ambassador to the US Aizaz Chaudhry said that Basit blamed him for not reaching the the post of foreign secretary.

Ambassador Aizaz Chaudhary earlier did not comment on the letter written to him by Abdul Basit dated July 5, 2017. However, he today (Wednesday) shared his sentiments with officers of the Embassy after it emerged on social media.

"Since this letter is on social media now I thought I should share with you my sense of disappointment at being targeted like that".

"Mr Basit has written a letter to me which he has circulated on social media," he said, besides terming it "rude and uncalled for".

He clarified that Basit "wrongly thinks that he could not reach the post of FS (foreign secretary) because of me". He added that jealousy of former high commissioner was not coming to an end even after his retirement.

"I just offered four Qul surahs especially Surah Al-Falak and ignored the letter", he stated while speaking to officers at the embassy.

Aizaz said that he served Pakistan to the best of his abilities, but "some of us like Basit fail to realize that life is a combination of human endeavor and fate," he added.

"We have to accept in humility what life gives us and then thank the God for that. Mischief mongering and mud slinging never pay in the larger scheme of things."

He said that his colleagues have written to him sharing their disgust at Basit's disgraceful and "un-officer like" conduct, and expressing their support and friendship to him.

'Your are Worst Foreign Secretary Ever'

Abdul Basit in letter dated July 5, 2017, which emerged on social media yesterday (Tuesday), has described the country’s envoy to the US, Aizaz Ahmad Chaudhry, as the “worst foreign secretary ever”.

In the letter purportedly written from New Delhi, Basit was reacting to a farewell letter sent by Chaudhry in March.

“The more I think the more I am convinced that you have been the worst Foreign Secretary ever. My concern is that you would also end up being the worst Pakistan Ambassador in Washington DC,” Basit wrote.

The letter listed several reasons why Chaudhry was “not made for the delicate profession of diplomacy”, including the joint statement issued by India and Pakistan after a 2015 meeting between Prime Minister Narendra Modi and then premier Nawaz Sharif at Ufa, Russia, that referred to an agreement on the national security advisers of the two sides discussing “all issues connected to terrorism” but contained no reference to the Kashmir issue.

Basit, who opted for early retirement and was replaced in New Delhi by Sohail Mahmood, has been silent on the letter since it began circulating on social media on Monday. Local media quoted its sources in the Foreign Office as saying that the letter is genuine.

Basit and Chaudhry share some history – in December 2013, Basit was widely tipped to become the foreign secretary after Aizaz's diagnosis of cancer was made a pretext to exclude him from the race.

During the course of finalisation of the new name for foreign secretary, it was revealed that Aizaz had already recovered from his ailment and was actively working on a rigorous assignment as an additional Secretary UN.

At the last minute, the government then revisited its decision and made Aizaz the new foreign secretary, and under his watch Pakistan achieved GSP plus status, secured membership of SCO and secured CPEC from China.

After the appointment of Aizaz as ambassador to the US, Basit had again been tipped for the post, but the government appointed Tehmina Janjua as foreign secretary. Basit thinks that Aizaz did not recommended him as FS to the PM after his posting.

Following Janjua's appointment, Basit took premature retirement as he was apparently not ready to work under his junior.