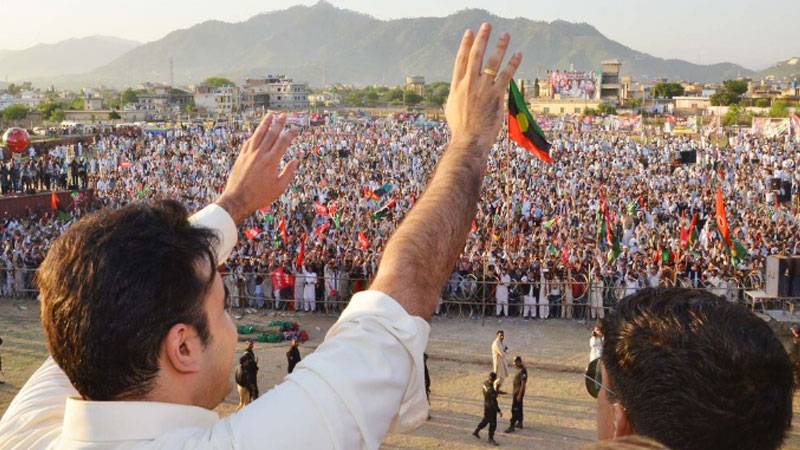 ISLAMABAD (Staff Report) - Chairman of the Pakistan People’s Party (PPP) Bilawal Bhutto Zardari on Monday kicked off his party’s rally for the upcoming elections in Azad Kashmir, hoping to restore his family's political legacy to the position it enjoyed under the late Benazir Bhutto, his mother, who died in a bomb blast at a rally in December 2007 in the run-up to the 2008 general elections that her party won.

"The road caravan led by Bilawal departed from Zardari House Islamabad to Mirpur where he is scheduled to address a public gathering," Senator Saeed Ghani said.

The son of SM #BenazirBhutto the bravest @BBhuttoZardari came out to wave hand to his workers #KarwanEBilawal pic.twitter.com/NZrvbtnKkg

Thrill visible; on both sides of road people of #Pakistan in 000s trying to see a glance of @BBhuttoZardari #PPP pic.twitter.com/Rl64fGG6z2

Mirpur truck broke down due to heavy rain & storm.Jiyalas don't want to leave without truck.We will make it for sure pic.twitter.com/BH65YMT7od

The rally, which is joined by a large number of PPP supporters, will reach Mirpur after passing through Islamabad, Rawat, Gujar Khan and Dina.

The political activity comes amid electioneering in Azad Kashmir where general elections will be held on June 26, 2016.

PTI, PML-N and PPP are engaged in rallies to fight elections, however, the competition is expected between PPP and PML-N in AJK, sources said.