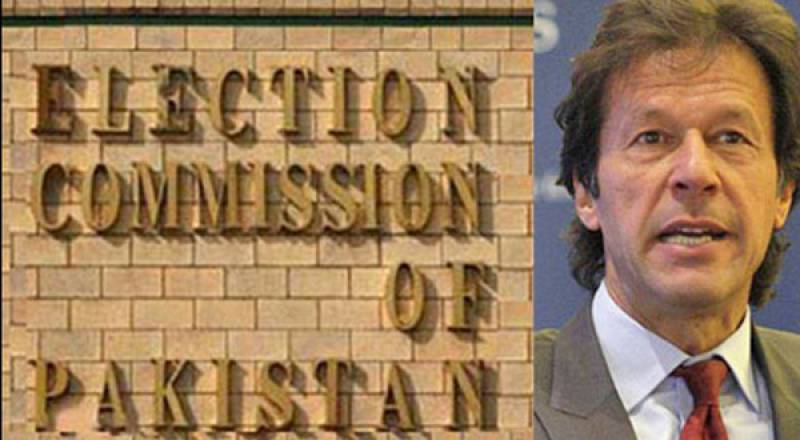 ISLAMABAD - Pakistan Tehreek-e-Insaf (PTI) has challenged the orders of Election Commission of Pakistan (ECP) regarding the party's foreign funding case in the Islamabad High Court (IHC).

According to media reports, the ECP had given the 'last chance' to the party on May 13 to submit its bank account details by Tuesday (today) but  PTI's counsel Saqlain Haider told Chief Election Commissioner Justice (retd) Sardar Muhammad Raza that they have challenged the ECP's order in the IHC, requesting adjournment of hearing.

To this, the chief election commissioner asked  PTI's counsel whether they have taken a stay order on the case, to which Haider replied that the IHC hearing on the case would commence on Wednesday (tomorrow).

The chief election commissioner responded that the party will have to submit its details in the ECP and that the ECP hearing would not be delayed further unless IHC issues any stay order in this regard.

The party has been given time till tomorrow to submit its bank account details with the ECP.

On December 1 last year, the ECP had also ordered the PTI to submit its accounts or face ‘legal consequences’. Instead of complying with the orders, the party accused the ECP of ‘political bias’ which led to a contempt application against Imran Khan filed by petitioner Akbar S. Babar.

On May 8 this year, the ECP once again directed the PTI to produce the records by May 17 but opposition party did not comply with the orders and instead sought adjournment on the plea that it had not received the detailed ECP order of May 8, whereby the commission decided its jurisdiction over the case.

Pakistan Tehreek-e-Insaf  was given May 30 as the final deadline for submission of bank details however the party took another route and moved IHC.

The case has been languishing since November 2014 when it was first filed by PTI’s founding member and former central vice president Akbar S. Babar alleging corruption and gross irregularities in collection of donations.

Apart from the foreign funding case, the Supreme Court of Pakistan is also hearing a case against the PTI supremo and secretary general Jahangir Tareen regarding the offshore firm set up by him.

The petitions were filed by PML-N’s Rawalpindi stalwart Haneef Abbasi last year who argued that both the PTI leaders were involved in wrongdoings and concealment of income in nomination papers.