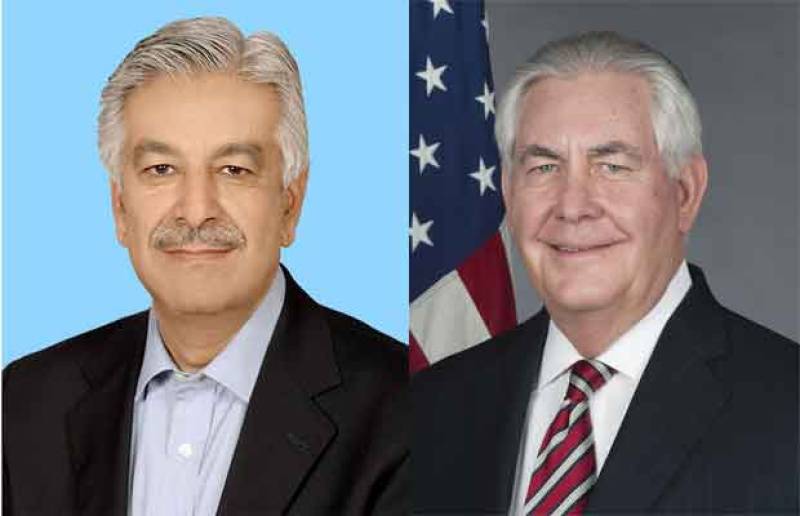 Asif's huddle with Tillerson will be a continuation of the first high-level meeting held between Prime Minister Shahid Khaqan Abbasi and US Vice President Mike Pence after President Donald Trump’s Afghan policy announcement.

At that meeting, Mr Pence suggested sending a US delegation to Islamabad for detente between the allies in the backdrop of Donald Trump's August 21st speech.

Islamabad accepted the US proposal but laid down talks with a meeting in Washington as a condition.

Pakistani officials poin­ted out that the speech had irked both opposition and treasury benches who unanimously adopted a resolution in the parliament, urging the government to reconsider its relations with the United States.

Pakistani officials also warned that since this was the election year in Pakistan, this rhetoric may get worse before it starts to improve, Dawn News reported.

Mr Asif's meeting with Secretary Tillerson on October 4 would be followed by a gathering at the US Institute of Peace (USIP), Washington, on US-Pak­istan relations.

While the USIP has confirmed the talk on October 5th, the State Department is still reluctant to publicly announce the visit.

“We don’t have anything to announce at this time,” said a State Department official when asked to confirm the Tillerson-Asif talks.

Donald Trump's speech in which he highlighted the policy shift for South-Asia and particularly Afghanistan was perceived in bad taste by Pakistani officials as the president had accused Islamabad of providing safe havens to militants.

Pakistan rubbished the claims and asked the world to do more as the country had suffered a lot at the hands of extremism.

Army Chief General Qamar Javed Bajwa is also expected to visit Kabul in the next few days to help devise solutions for the war-torn country and improve bilateral ties.