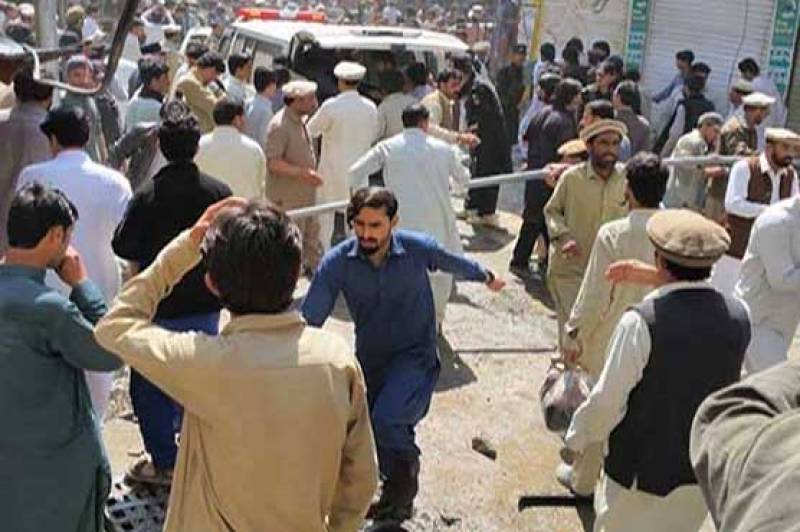 PARACHINAR - At least 24 people including a woman and two children were killed and 68 others injured when a powerful blast occurred outside an Imambargah at a market of Parachinar city in Kurram Agency on Friday.

The blast reportedly occurred this morning in the crowded Noor market where a main Imambargah is also located.

After the blast, the area has been cordoned off by the forces. It is being reported that bomb was planted in a vehicle.

According to the political administration, injured were being shifted to the hospitals, while emergency has been declared in all hospitals of the city.

On the other hand, helicopters of Pakistan Army have been departed to the bomb-hit city in order to rescue the injured.

No one has claimed responsibility for the bombing.

On January 21, at least 25 people had been killed and over 65 injured when a bomb blast occurred at a marketplace in the northwestern city of Parachinar in Kurram tribal agency.

Lashkar-i-Jhangvi al-Alami along with Tehreek-i-Taliban Pakistan (TTP) splinter Shehryar Mehsud had claimed the responsibility of the attack.

On February 22, Pakistan Army had launched 'Operation Radd-ul-Fasaad' across the country to root out terrorism without any discrimination, the Inter-Services Public Relations said on Wednesday.

"The operation aims at indiscriminately eliminating residual or latent threat of terrorism, consolidating gains of operations made thus far and further ensuring the security of Pakistan's borders," the ISPR statement added.

The countrywide military operation - 'Operation Radd-ul-Fasaad', or ‘Elimination of evils’ - had been launched days after a series of deadly militant attacks killed more than 115 people across Pakistan in just over a week, including civilians, policemen and soldiers.