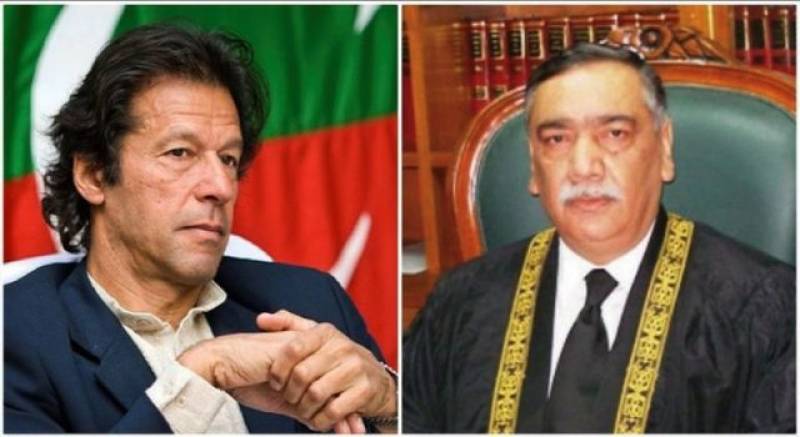 ISLAMABAD - The Supreme Court of Pakistan Tuesday issued a clarification about Pakistan Tehreek-e-Insaf (PTI) chairman Imran Khan’s allegation that he was approached by a sitting SC judge during his anti-government lockdown in Islamabad last year.

The Supreme Court has dismissed the allegations as ‘unfounded’ and ‘untrue’.

“It is being insinuated in some sections of the social, print and electronic media that in a recent interview with a television channel Mr. Imran Khan, Chairman, Pakistan Tehrik-i-Insaf had stated that he had been requested by Honourable Mr. Justice Asif Saeed Khan Khosa, Judge, Supreme Court of Pakistan to file a petition before the Supreme Court of Pakistan in connection with the Panama Papers scandal,” the statement said.

“The allegation is absolutely unfounded and completely untrue. The interview itself refers to some observations made in the Courtroom during a judicial proceeding.”

“The fact of the matter is that on November 1, 2016 many Constitution Petitions pertaining to the said scandal were fixed for hearing before a Larger Bench of the Supreme Court headed by the then Honourable Chief Justice of Pakistan Mr. Justice Anwar Zaheer Jamali and Honourable Justice Khosa was also a part of that 5-member Bench,” read the SC press release.

“When the hearing of the matter came to a close on that day Honourable Justice Khosa addressed the learned counsel for the parties and observed in open Court to the effect that now that the Court sitting at the apex of the dispute resolution mechanisms in the country had taken cognizance of the matter the parties would be well advised to ‘hold their horses’ and to reconsider their positions regarding the call for lockdown of Islamabad planned for the next day which was likely to cause extreme hardship to the citizens at large.”

The SC statement further said that “It appears that those observations were accorded due deference and the lockdown of Islamabad was called off. All the major television channels in the country had reported the said observations on the same day and all the major newspapers had reported those observations on the following day, i.e. November 2, 2016 and this is a matter of record and hundreds of people, including scores of politicians, journalists and media persons, attending the Court on that day may confirm that factual position.”

“Honourable Justice Khosa has never met or talked to Mr. Imran Khan in any private capacity throughout his life and has no personal acquaintance with the gentleman. The relevant Constitution Petitions had been filed before the Supreme Court by different petitioners many months prior to November 1, 2016. The twist given to some of the words used in the interview mentioned above is, therefore, malicious and unfortunate,” it concluded.