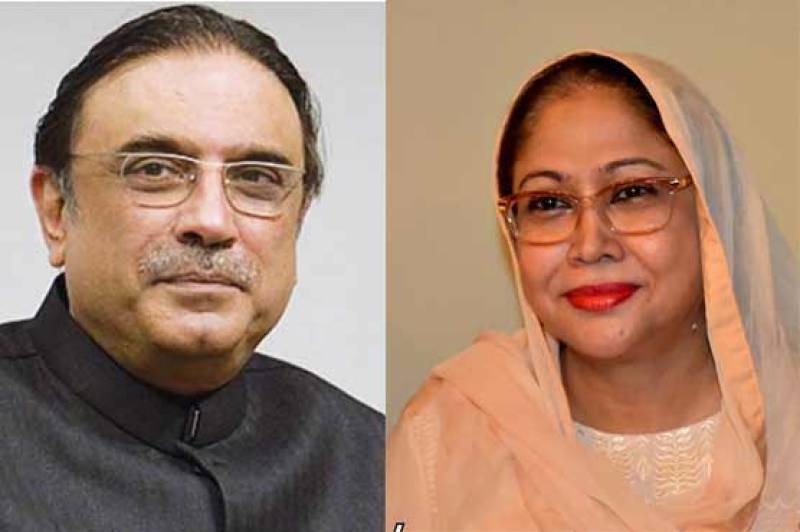 ISLAMABAD - The Federal Investigation Agency (FIA) has once again summoned Asif Ali Zardari and his sister Faryal Talpur to record their statements in fake accounts case.

The former president and his sister have been directed to appear before the investigation team probing the money laundering case. Their lawyers had recorded the statements on their behalf.

Former president Asif Ali Zardari, Faryal Talpur and their associates are accused of sending Rs35 billion abroad through fake accounts after which their names were placed on Exit Control List (ECL).

In her application before the Sindh High Court (SHC), Talpur stated that the FIA’s interim charge-sheet does not clearly mention the charges or her name.

She has pleaded the court to dismiss the FIA’s charges and issue a stay order on the action being taken on its basis.

The FIA is investigating 32 people in relation to money-laundering from fictitious accounts, under which Zardari’s close aide and then-Pakistan Stock Exchange Chairman Hussain Lawai was arrested earlier this month.

Over 20 ‘benami’ accounts at a private bank were opened in 2013, 2014 and 2015 from where transactions worth billions of rupees were made.

The amount according to FIA sources is said to be black money gathered from various kickbacks, commissions and bribes. But despite these huge transactions, the bank authorities never reported them to the authorities concerned including the FIA.