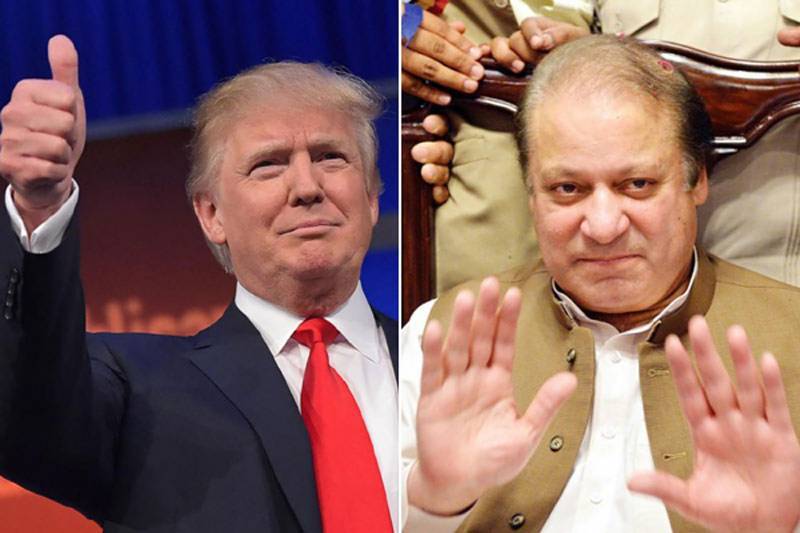 LAHORE - The first official yet probably one of the most cordial conversations in the history of Pak-US relations, between Prime Minister Nawaz Sharif and President-elect Donald Trump, has met with mixed reaction from all over the world.

Prime Minister Nawaz Sharif telephoned US President-elect Donald Trump on Wednesday and felicitated him on his recent electoral victory over Democrats nominee Hillary Clinton. Here is the transcription of the phone call, which was released by the Pakistani government:

"Prime Minister Muhammad Nawaz Sharif called President-elect USA Donald Trump and felicitated him on his victory. President Trump said Prime Minister Nawaz Sharif you have a very good reputation. You are a terrific guy. You are doing amazing work which is visible in every way. I am looking forward to seeing you soon. As I am talking to you Prime Minister, I feel I am talking to a person I have known for long. Your country is amazing with tremendous opportunities. Pakistanis are one of the most intelligent people. I am ready and willing to play any role that you want me to play to address and find solutions to the outstanding problems. It will be an honor and I will personally do it. Feel free to call me any time even before 20th January that is before I assume my office," said the readout.

As it was the first contact between two head of states since Nov 8 election, the foreign and national media was quick to carry the news. 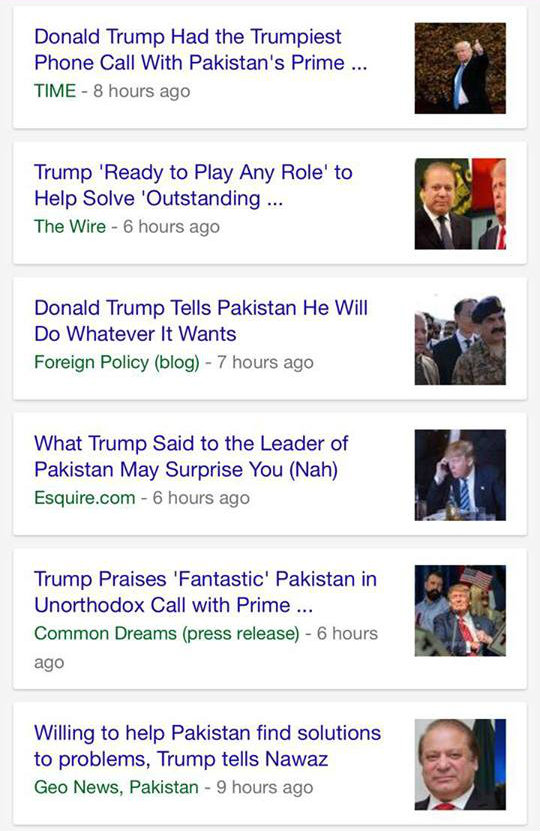 Although confused and baffled over the released transcript mentions Trump's huge praise for Pakistani people and their premier, almost every international newspapers and their websites carried the story in their own respective versions. 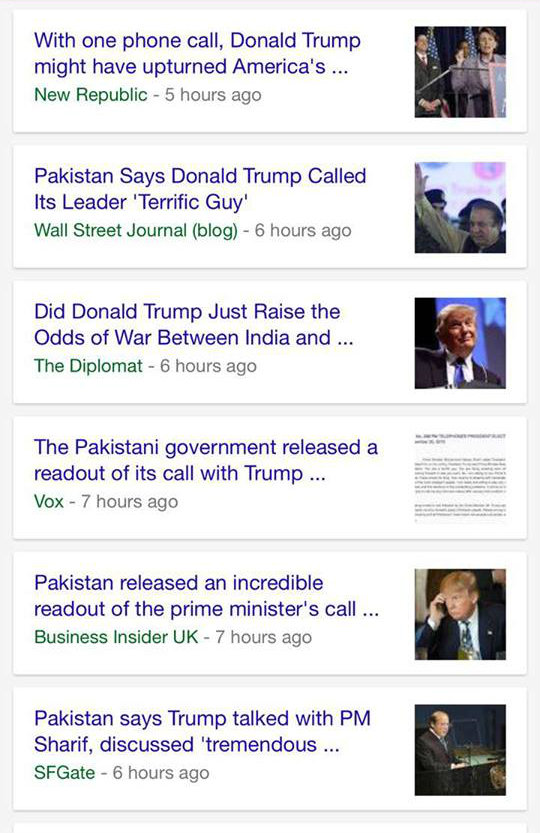 Some were shocked to see Trump's warm regard towards Pakistan, a Muslim country for which he has uttered stern statements before.

The Independent wrote: Donald Trump has never met Pakistan’s Prime Minister Nawaz Sharif. But he knows he has a “very good reputation”, and understands he is a “terrific guy”. In fact, Mr Trump feels such a connection with the Pakistani leader, whom he hopes to visit soon, that he feels like he is “talking to a person I have known for a long time”.

Some referred to the haunting pasts of two businessmen-turned-politicians:

The Washington Post wrote: Lavishing praise on the Pakistanis would be a major turnaround for the president-elect. In 2012, Trump took to his favorite social media platform, Twitter, to denounce Pakistan. Sharif, the Pakistani prime minister, is markedly less loved in his country than Trump's praise would make it seem. He is dogged by allegations of corruption, and the release of the Panama Papers last summer appeared to confirm many Pakistanis' suspicions.

Some just couldn’t take in Trumpy tribute to “the most intelligent Pakistanis”:

PML-N’s official media team was proud to present the ‘Conversation of the Century’:

When it’s about Nawaz Sharif, we can’t miss the ‘Criticizer-in-Chief’ in Pakistan:

Good news is Trump spoke to Nawaz Sharif. Bad news for NS is this won't save him from Panama scandal - not even if a Trump letter arrived!

And his ‘terrific team’:

While the two former businessmen stuck to warm words for now, such a refreshing talk between PM Nawaz and President-elect Trump is hoped to be paving way for better relations between the two countries in coming days.

Nonetheless, Mr. Trump has yet to clear his presidential campaign’s promise to enact a "total and complete" shutdown of Muslims coming to America, later downgraded to "extreme vetting".

“Get it straight: Pakistan is not our friend. We’ve given them billions and billions of dollars, and what (cont) http://t.co/O5S4cQV3

For the record, the overwhelming majority of Pakistanis, including the prime minister, are Muslim.

Trump has been a vocal e-critic of Pakistan for “providing safe sanctuary” to slain al-Qaida founder Osama bin Laden:

When will Pakistan apologize to us for providing safe sanctuary to Osama Bin Laden for 6 years?! Some "ally."

To many Pakistanis, Trump's anti-Muslim rhetoric - he once proposed banning Muslims entering the United States - and business ties to India are signs that his administration could shift further toward New Delhi.

Trump made similarly flimsy appeals to Hindus, the majority faith in Pakistan’s neighbor and regional rival India, during the general election.

“If I am elected president, the Indian and Hindu community will have a big friend in the White House,” the real estate billionaire told a crowd at “Humanity Against Terror,” an event in Edison, New Jersey, last month that focused on the bloody 69-year border war for Kashmir between India and Pakistan.

Last month, Trump’s campaign released an iMovie-style political ad targeting Hindu voters. The ad has since been deleted, but Trump’s botched attempt at Hindi is unforgettable: