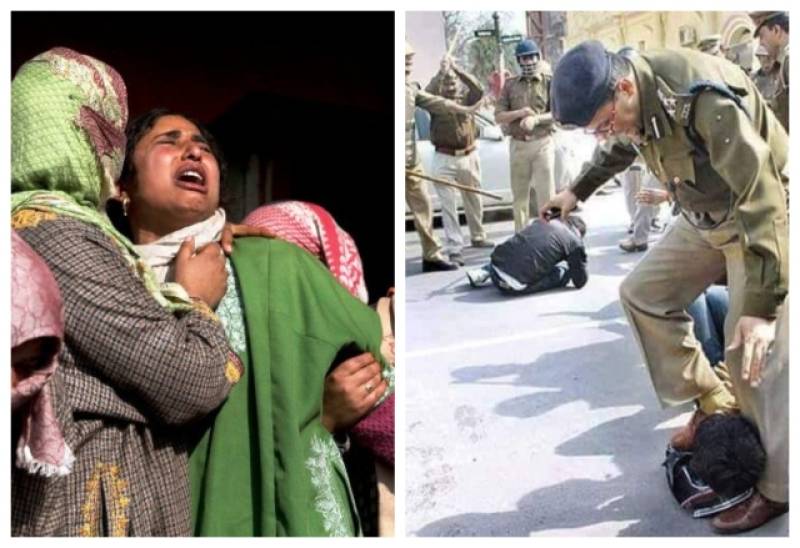 ISLAMABAD – Indian troops in their unabated acts of state terrorism martyred 95,265 innocent Kashmiris during the past 29 years.

According to the data issued by the Research Section of Kashmir Media Service, of those martyred, 7,120 were killed by the troops in custody. As many as 145,504 people were arrested by Indian forces during the period. The troops destroyed 109,201 residential houses and other structures. The Indian forces’ personnel molested and gang raped 11,111 women during the period, KMS reported on Wednesday.

The Chairman of All Parties Hurriyat Conference, Syed Ali Gilani, in a statement issued in Srinagar said that India continued with its both physical and psychological onslaught on the people of Jammu and Kashmir. Syed Ali Gilani also condemned the criminal assault by a Hindu mob on the shopkeepers in Indian city of Shimla.

Senior APHC leader and the Chairman of Tehreek-e-Hurriyat Jammu and Kashmir, Muhammad Ashraf Sehrai in a statement said that anti-movement agencies were using disgruntled elements to carry out uninvited acts to malign the Kashmiris’ ongoing freedom movement. He pointed out that the desecration of historical Jamia Masjid Srinagar by some miscreants on last Friday was a part of the agencies’ plan to change the basic nature and character of the ongoing freedom movement.

ISLAMABAD - The International Forum for Justice and Human Rights (IFJHRJK) has said that a total of 355 people ...

Hurriyat leader, Zafar Akbar Butt, during his mass contact programmes in Kralpora and Rawalpora areas of Srinagar today, asked for settlement of the Kashmir dispute through talks among all stakeholders.