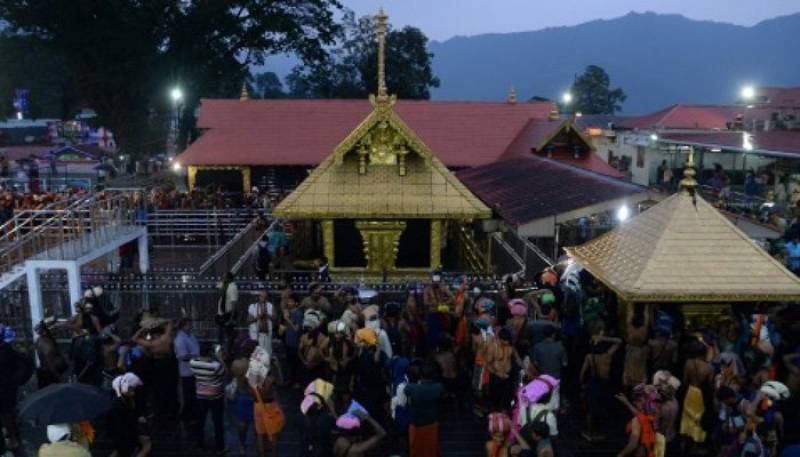 DUBAI - Two women secretly entered one of Hinduism´s holiest shrines on Wednesday, breaching a blockade around the Sabarimala temple where devotees have been enraged by an Indian Supreme Court decision to overturn a ban on women aged between 10 and 50.

The pair entered the hilltop temple in Kerala state just before dawn under police protection and left undetected, officials confirmed.

Sabarimala has been at the centre of an increasingly angry showdown between Hindu traditionalists who support the longstanding ban and women activists who have been forced back several times from the temple.

Video images showed the women, Kanaka Durga and Bindu, who has only one name, wearing black tunics with their heads bowed as they rushed in.

"We did not enter the shrine by climbing the 18 holy steps but went through the staff gate," one of the women, who both remain under police guard, later told reporters.

Kerala state Chief Minister Pinarayi Vijayan said: "It is a fact that the women entered the shrine. Police are bound to offer protection to anyone wanting to worship at the shrine."

The defiant act is certain to set off a new furore in India over gender.

The Supreme Court on September 28 declared illegal a decades-old ban on women of menstruating age at Sabarimala, which is a four-hour uphill trek from the nearest village.

Repeated efforts by women to enter the temple after the ruling have been rebuffed by Hindu devotees with police having to step in to escort them out.

As soon as news of Wednesday´s breach spread, the temple head priest ordered the shrine closed for a purification ritual -- reflecting the old but still prevalent belief that menstruating women are impure. It reopened after around an hour.

In October, devotees clashed with police in a town near the temple leading to the arrest of more than 2,000 people.

On Tuesday, tens of thousands of women formed a human chain across Kerala to back the demand for women´s access to the temple. Media reports said some were heckled and stoned by right-wing activists.

The Supreme Court is to start hearing a legal challenge to its ruling on January 22.

They argue that the court has ignored their beliefs that the Sabarimala temple´s deity Ayyappa was celibate.

Modi´s government did not immediately react to the women getting into the temple, but activists celebrated.

"Watching the visuals of them making their way into the shrine makes me cry in joy — how long it has taken for us to claim space, to write our way into history," wrote controversial feminist author Meena Kandasamy on Twitter.

"Such cheap tactics are unbecoming of a state government," he said on Twitter.

Women are still barred from a handful of Hindu temples in India. The entry of women at Sabarimala was taboo for generations and formalised by the Kerala High Court in 1991.

The gold-plated Sabarimala temple complex sits atop a 3,000-foot (915-metre) hill in a forested tiger reserve.

Legend has it that Ayyappa was found abandoned as a baby. A king of the Pandalam dynasty, which still manages the temple operations, found and raised him.

At the age of 12 Ayyappa emerged from the forest riding a tigress. The boy fired an arrow which landed at the site where the temple is now located.