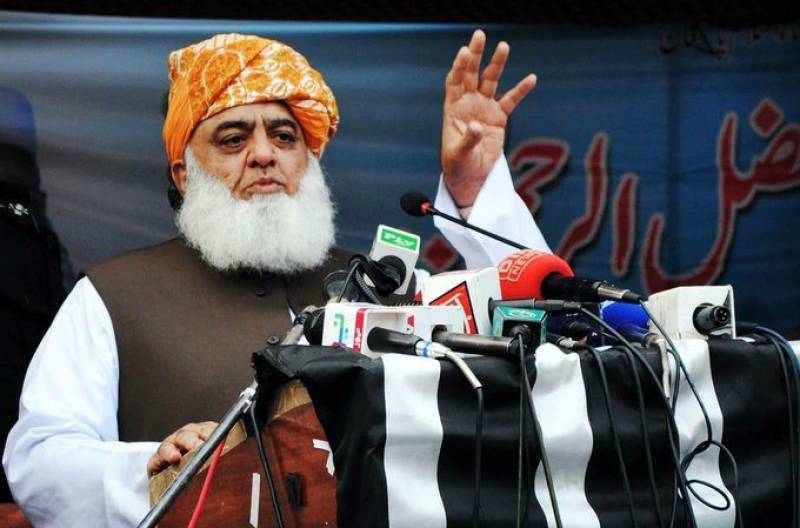 ISLAMABAD – The federal government on Saturday lashed out Jamiat Ulema-e-Islam-Fazl (JUI-F) chief Maulana Fazlur Rehman for inciting the public against the elected prime minister of Pakistan during his address to the participants of the so-called Azadi March sit-in.

He said the core committee has decided to go to court against the head of the religiopolitical party after he made a statement that the public has the capacity to arrest Prime Minister Imran Khan from inside the PM office.

He went on to say that such provoking statement is equivalent to inciting people on mutiny, Radio Pakistan reported.

However, he categorically said that the prime minister would in no way tender his resignation and resolved that the government would not succumb to the opposition’s threats and pressure tactics.

He further said that national institutions are our pride and working for the nation. Khattak said if the opposition has any issue, they should talk to the agreement.

Participants of the core committee held at Bani Gala were also of the view that such language will not be tolerated against the institutions, which have played a key role for ensuring peace in the region by offering sacrifices.

He said, “Our doors are open for talks with opposition but we will not allow any attempt to create chaos in the country”.

If the march participants leave their designated place to move forward, they will be breaking the agreement signed with the administration, he said and warned of legal stern legal action.

He said any damage caused to lives and property will be the sole responsibility of opposition if they resort to violence.

The head of government's negotiation team said holding protest at this critical juncture when Kashmir issue is in limelight will undermine this important cause.

He said the criticism on national institutions by march leaders will not serve any purpose.

Replying to a question, Education Minister Shafqat Mahmood said Prime Minister Imran Khan very effectively highlighted the case in the world. The protest march has diverted the attention from the Kashmir issue.

He told a questioner that opposition should lodge their complaint to Election Commission of Pakistan if they have any objection on national election results.