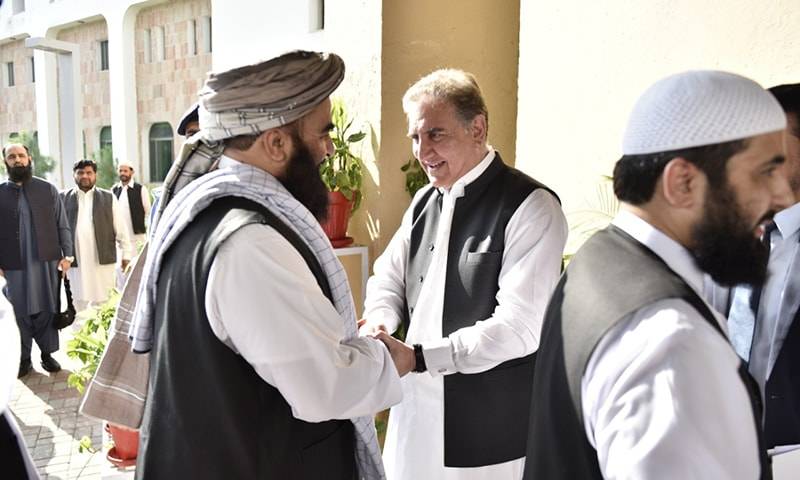 ISLAMABAD - Pakistan and Afghan Taliban have agreed on the need for earliest resumption of the Afghan peace process.

The understanding came at a meeting between Foreign Minister Shah Mahmood Qureshi and a delegation of the Taliban Political Commission led by its head Mullah Abdul Ghani Baradar in Doha, in Islamabad on Thursday.

The FM reiterated Pakistan's commitment and continued strong support for all efforts in this regard.

He said Pakistan will continue to support all efforts to achieve permanent peace in Afghanistan, which is essential for Pakistan's own socio-economic development and progress.

It was emphasized that reduction of violence by all parties to the conflict is necessary to provide an enabling environment for resumption of the peace process at an early date.

While appreciating Taliban's serious engagement in the peace process, the FM underscored the need to take these efforts to their logical conclusion.

He expressed the hope that the currently paused peace process would be restarted at an early date.

Qureshi added Pakistan has maintained for several years that there is no military solution to the complex situation in Afghanistan. An inclusive peace and reconciliation process, involving all sections of the Afghan society, is the only, practical way forward.

Thanking Pakistan for the hospitality, the TPC delegation appreciated Pakistan's support for peace in Afghanistan.

More than 12 Taliban representatives arrived in Islamabad on Wednesday.

Taliban officials have also visited Russia, China, and Iran for the peace talks.

Last month, the US and Taliban announced that they were close to reaching a deal, despite concern among some US security officials and within the Afghan government that a US withdrawal could leave the country with more conflicts and open the way for the resurgence of militant factions.

Following the Taliban’s bomb attack in Kabul last month, which left a US soldier and 11 other people dead, President Donald Trump halted the talks.

The Taliban also planned to follow up on Pakistan Prime Minister Imran Khan’s recent comments ahead of a meeting in New York with Trump, that he would try to convince the US president to re-enter talks, the Taliban official said.