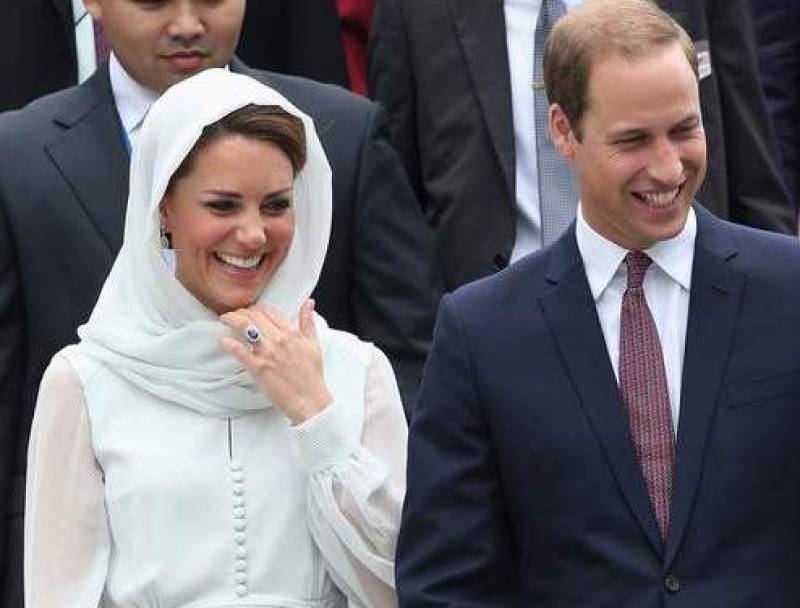 LONDON - The Duke and Duchess of Cambridge, Prince William and Kate Middleton, have said they are looking forward to 'building a lasting friendship' with the people of Pakistan during their first-ever visit to the country.

"The UK’s links with Pakistan are extensive, and Their Royal Highnesses are looking forward to building a lasting friendship with the people of Pakistan," read a statement by the royal couple's communication secretary on Friday.

The official stated that the tour will encompass "the modern leafy capital Islamabad, the vibrant city of Lahore, the mountainous countryside in the North, and the rugged border regions to the West".

The handout, released by Kensington Palace, currently the official residence of the Duke and Duchess, said that the visit will span over 1000km, and will take in Pakistan’s rich culture, its diverse communities, and its beautiful landscapes.

The visit scheduled between 14th and 18th October is being made on the request of the Foreign and Commonwealth Office.

Whilst The Duke and Duchess’s programme will pay respect to the historical relationship between Britain and Pakistan, it will largely focus on showcasing Pakistan as it is today – a dynamic, aspirational and forward-looking nation, stated the communique.

It added that throughout the tour, their Royal Highnesses will visit programmes which empower young people, and organisations that help ensure they have the best possible start in life.

"Access to quality education, particularly to girls and young women is one of the UK’s top priorities in Pakistan. The Duke and Duchess are looking forward to spending time meeting young Pakistanis, and hearing more about their aspirations for the future," the secretary detailed.

"Their Royal Highnesses’ programme will also cover how communities in Pakistan are rapidly responding and adapting to the effects of climate change. This a key area of interest for Their Royal Highnesses; they are keen to learn more about the climate change issues affecting Pakistan and our world, and the positive work being undertaken to combat these challenges," stated the press release.

The communication secretary of the royal couple explained that Royal Highnesses will also spend time understanding the complex security picture in Pakistan and will learn more about the challenges and opportunities, both of the past and today.

The official added that the UK has been a key partner for Pakistan, and The Duke and Duchess will meet UK and Pakistan military personnel who are sharing expertise to improve security.

"Over the course of the visit, Their Royal Highnesses will meet a wide variety of people, including children and young people, leaders from government, business and the charity sector, inspiring conservationists, and well-known cultural figures and sporting stars," the press release added.

The official elaborated that this is the most complex tour undertaken by The Duke and Duchess to date, given the logistical and security considerations.