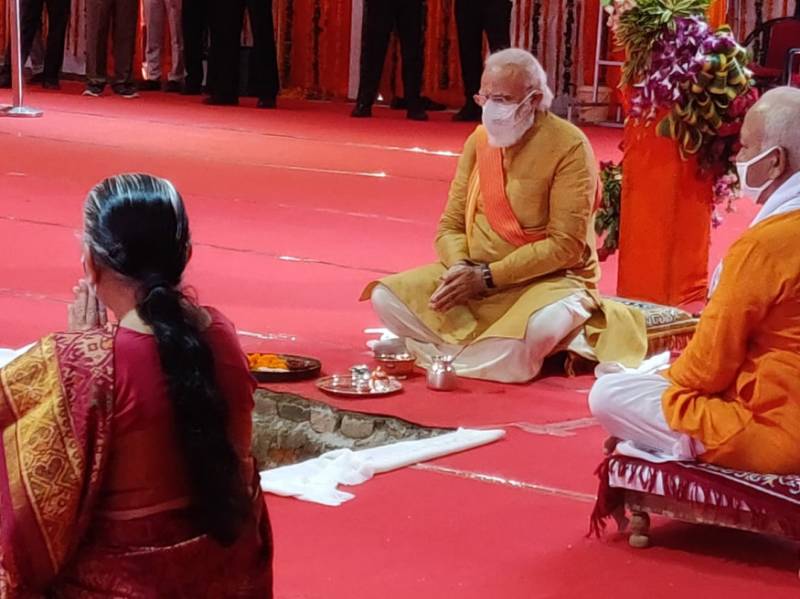 ISLAMABAD – Pakistan has expressed strong condemnation after Indian Prime Minister Narendra Modi on Wednesday laid foundation of Ram temple at site of historic Babri mosque, which was razed by Hindu extremists in 1990s.

A statement issued by Foreign Office says, “Pakistan reiterates its strong condemnation of construction of ‘Ram Mandir’on the site where historic Babri Masjid stood for around five centuries”.

The flawed judgment of the Indian Supreme Court paving the way for construction of the temple not only reflected the preponderance of faith over justice but also the growing majoritarianism in today’s India, where minorities, particularly Muslims and their places of worship, are increasingly under attack.

A temple built on the site of a historic mosque will remain a blot on the face of the so-called Indian democracy for the times to come. The painful scenes of the demolition of Babri Masjid by BJP and its extremist Hindu affiliates in 1992 remain fresh in the minds of Muslims across the globe.

Since then, the OIC has passed numerous resolutions condemning the heinous act of demolishing the centuries-old mosque, it said, adding: “Future generations of Muslims would continue to be cognizant of the new illegitimate structure which the Hindutva-driven BJP has campaigned for, and is bent upon constructing as part of its agenda of converting India into a ‘Hindu Rashtra.’

“Today’s event in Ayodhya reflected an unrelenting drive in this direction.”

The extreme haste in starting construction of a temple at the Babri Masjid site amidst the ravaging Covid-19 pandemic, anti-Muslim Citizenship Amendment Act (CAA), the looming National Register of Citizens (NRC) to disenfranchise Muslims, the targeted killings of Muslims in Delhi with state complicity early this year, and other anti-Muslim measures point to the fact how Muslims in India are being demonized, dispossessed, marginalized and subjected to targeted violence. India’s gross and systematic human rights violations in the Indian Illegally Occupied Jammu & Kashmir (IIOJK), and BJP’s sinister design to change the demography of the occupied territory, all reflect the rising tide of the divisive and extremist ideology in India which poses threat to religious harmony in India and to regional peace.

The RSS-BJP combine is responsible for continued targeting and destruction of places of worship of Muslims in India in an organized manner, whether it was during the Gujarat pogrom 2002 or Delhi pogrom 2020. The attacks by Hindu extremists on mosques have continued even during the on-going pandemic. Not only Muslims have been blamed for spreading the Covid-19 but their religious freedom has also come under attack by the BJP-RSS zealots who treat minorities as second-class citizens.

“Pakistan urges the Indian government to ensure safety, security and protection of minorities, particularly Muslims and their places of worship and other Islamic sites on which the Hindu extremists and zealots have laid claims,” the FO said.

The international community, the United Nations and relevant international organizations should play their part in saving the Islamic heritage sites in India from the ‘Hindutva’ regime and ensure protection and religious rights of minorities in India.