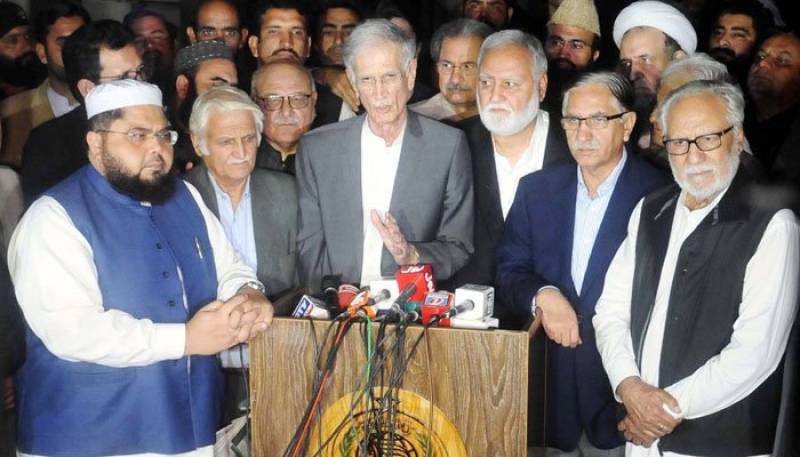 ISLAMABAD - The government's negotiation team and opposition's Rahbar Committee on Tuesday failed to break the deadlock in the second round of talks amid ongoing anti-government protest demanding the resignation of Prime Minister Imran Khan.

Defence Minister Pervez Khattak, the chief negotiator of the government, talking to media after the meeting said that both parties were not ready to budge an inch from their positions.

Rahbar Committee Convener Akram Durrani informed the media, "We told the government committee about our demands for the premier's resignation and fresh elections".

Khattak said, "We have agreed to several demands made by the opposition," adding that negotiations on rest of them will continue after consultation with party leadership.

He said that efforts were being made to find a middle ground to break the deadlock with the opposition.

Earlier today, it emerged that the prime minister is ready to accept the demands of the Azadi March protesters in accordance with the Constitution.

But, the premier has refused to tender resignation, one of the major demand of the opposition parties which have gathered under the flag of Jamiat Ulema-i-Islam-Fazl (JUI-F).

The official committee said that the demands of the opposition were mostly about the election reforms, local media reported citing source as saying.

The government, during the meeting, also agreed to make functional the parliamentary committee set up to probe election rigging.

About the deployment of army at polling stations, the government committee said that the troops deployment was based on security needs.

The government also assured the Rahbar Committee of protection of Islamic articles in the Constitution of Pakistan.