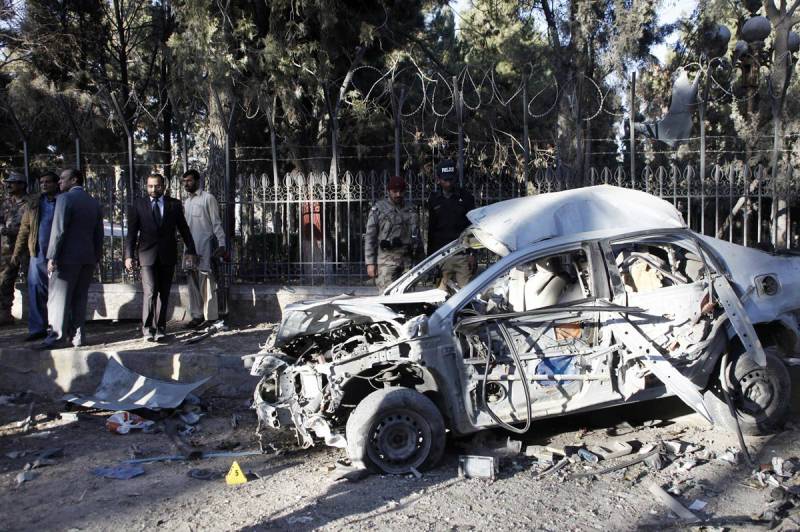 QUETTA (Staff Report) - At least 10 people including four security personnel, a woman and child were killed and 40 others sustained injuries in a suicide attack outside Quetta district courts on Saturday .

Security personnel convoy comprising a truck and two vehicles was on a routine patrolling on the Adalat Road of Quetta city when a bicycle rider targeted it. 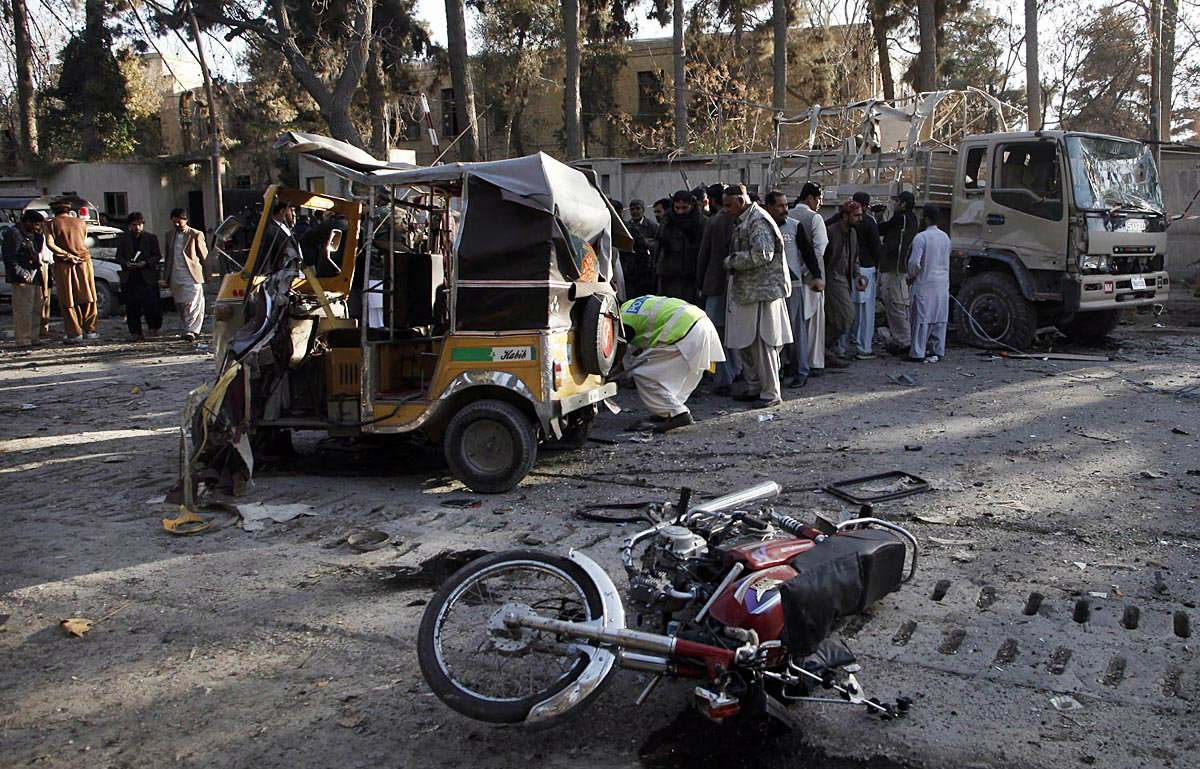 A large number of security personnel rushed to the spot shortly after the incident and cordoned off the area. The deceased and injured were shifted to the Civil Hospital Quetta.

The outlawed Tehreek-e-Taliban Pakistan (TTP) claimed responsibility for the attack. 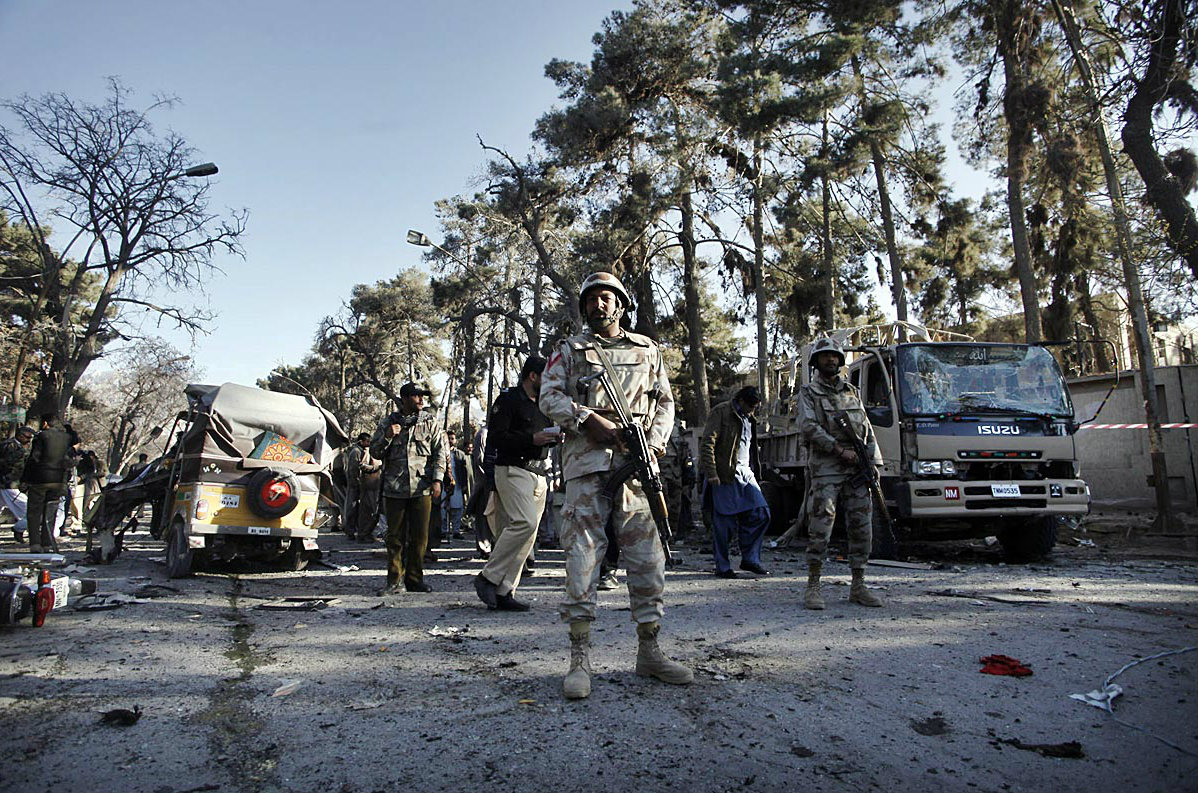 “The TTP’s TSG unity carried out the attack that targeted the convoy of security forces,” Taliban spokesperson, Mohammad Khorasani said in a statement.

The site of the blast is a commercial area with a number of markets located in the vicinity.

Heavy firing was also heard in the area following explosion. Three police were reportedly injured in the attack.

Rescue teams and law enforcement agencies reached the scene and cordoned off the area. 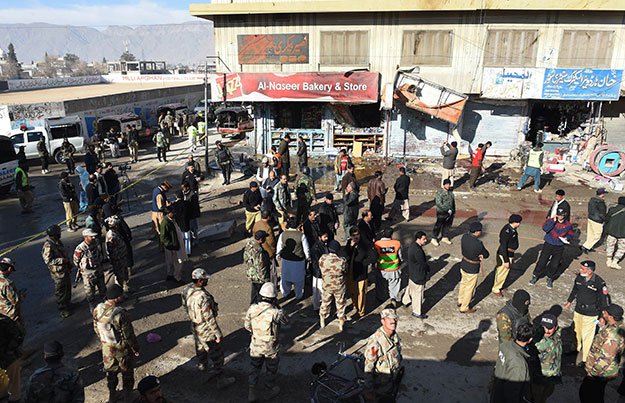 An emergency has been declared in all nearby hospitals including Civil Hospital Quetta, sources told Daily Pakistan.

DIG Police Quetta Sayed Imtiaz Shah has said it was a suicide attack as a bicycle rider hit the FC’s Convoy on Adalat Road area. “Around 12 to 15 kg explosive material was used in the blast,” the DIG Said.

The Prime Minister directed the authorities concerned to provide best medical facilities to the injured of the blast and also prayed for their early recovery.

Balochistan Chief Minister Nawab Sanaullah Zehri has ordered the authorities to put a high alert  across the province.

The chief minister also announced compensation of Rs1 million for those killed and Rs500,000 for the injured.

Inspector General Frontier Corps Balochistan Major General Sher Afgun said that the elements who are involved in terrorist activities will be eliminated.

“Action against the terrorists will be fast and will bring peace for people of Balochistan,” he said.

On January 13, a suicide bomber blew himself up outside a polio vaccination centre in Quetta, killing at least 15 people, mainly police personnel.

The policemen were posted outside the centre to accompany polio workers on the third day of a vaccination campaign, which are frequently targeted by Taliban and other militant groups in Pakistan.