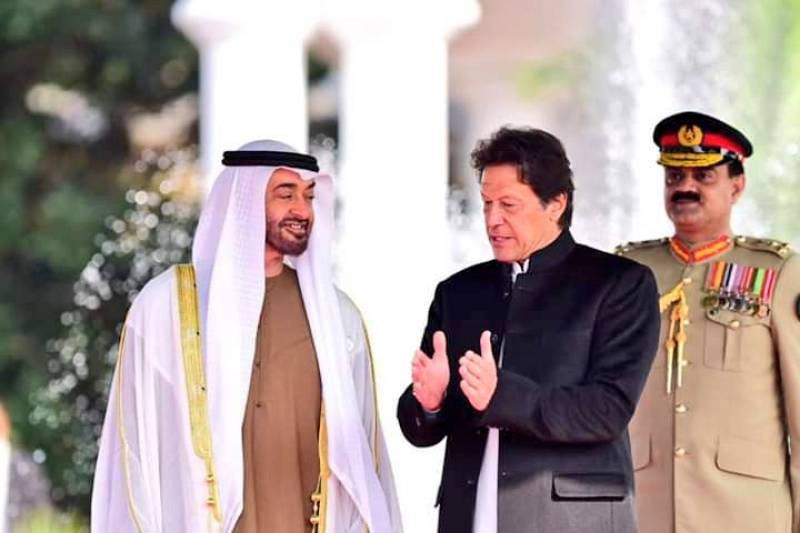 They also resolved to take all necessary measures to deal with matters related to trade enhancement, and decided to form a task force to achieve the objective, the PM Office media wing said in a statement issued on the conclusion of the UAE Crown Prince’s official visit to Pakistan.

The two leaders noted that the forthcoming Pakistan-UAE Joint Ministerial Commission, which would be co-chaired by the respective foreign ministers in Abu Dhabi in February 2019, could play a pivotal role in chalking out a comprehensive road map, and in fast tracking the approval of pending agreements and memorandums of understanding (MoUs).

Prime Minister Imran Khan & His Highness Sheikh Muhamed bin Zayed Al Nahyan, Crown Prince of Abu Dhabi having a one on one meeting on mutual collaboration between both countries.

To counter white collar crimes, including money laundering, the two leaders instructed the authorities concerned to expedite the finalization of the Mutual Legal Assistance Agreement.

They also expressed satisfaction at the ongoing defence and security cooperation, and resolved to explore further collaboration in the areas of training, joint exercises and defence production.

On the invitation of Prime Minister, Crown Prince Sheikh Mohamed bin Zayed Al Nahyan paid a state visit to Pakistan on Sunday. He was accompanied by a high level delegation comprising cabinet members and senior officials. The Crown Prince visited Pakistan after 12 years.

“The visit underscored the strength and substance of the Pakistan-UAE special relationship, which is based on the spirit of mutual affection and deep trust, and is rooted in age old civilizational, religious, cultural and commercial affinities,” the statement said.

Prime Minister @ImranKhanPTI hosted lunch in the honour of Crown Prince of Abu Dhabi H.H @MohamedBinZayed and his delegation which was also attended by civil and military leadership of Pakistan. pic.twitter.com/I2tYBL7Ybv

Sheikh Al Nahyan, who last visited Pakistan in 2007, was given a red carpet welcome and a 21-gun salute when he touched down at airbase around noon today amid much fanfare in the capital.

The Crown Prince was received by the Prime Minister and accorded a ceremonial reception at the Prime Minister’s House and a flypast by JF-17 Thunder jets, which was followed by a tete-a-tete and delegation level talks.

Guard of honor was also given to the Crown Prince.

The two leaders expressed their resolve that while building on the strong and proud legacy, they would continue to strive for progress, prosperity and stability of both the UAE and Pakistan.

Both the leaders held wide ranging talks focusing on all areas of bilateral relations. Taking note of the positive trajectory of relations, the two leaders expressed their determination to further strengthen the historic and mutually beneficial relationship.

They also discussed various issues of regional and global importance, and noted that a complete identity of views on the issues serves as the basis of long-lasting and trusted friendship.

Prime Minister Imran Khan expressed his gratitude for the generous balance of payment support of US$3 billion and noted that the financial support showed the UAE’s continued commitment and friendship that remained steadfast over the years.

He also welcomed the UAE’s interest in investing in Pakistan’s oil and gas, logistics, ports and construction sectors. 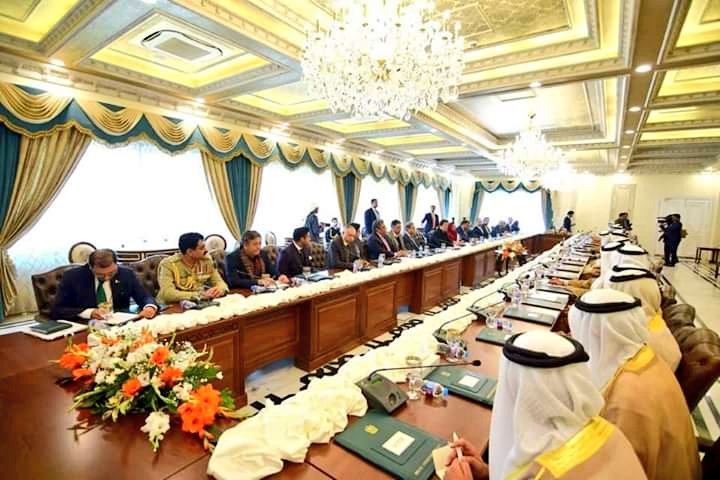 The Prime Minister briefed the Crown Prince on the situation in the Indian Occupied Jammu and Kashmir and the plight of Kashmiris.

They strongly condemned terrorism in all its forms and manifestations, and expressed their resolve to work closely to root out the scourge.

The Crown Prince recognized the efforts and unparalleled sacrifices made by Pakistan to eliminate terrorism and extremism.

Prime Minister Imran Khan briefed the UAE leadership about his government's people centric reform agenda, and the steps taken to promote transparency and accountability at all levels of government.

The PM briefed the Crown Prince about the efforts Pakistan was making to support and facilitate the Afghan-owned and Afghan-led reconciliation process.

He also appreciated the role the UAE was playing by hosting reconciliation talks in Abu Dhabi. The two leaders agreed to work closely for the lasting peace and stability of Afghanistan.

The premier congratulated the leadership of UAE for declaring 2019 as the year of tolerance and noted that it was the best way to pay tribute to the vision and legacy of Sheikh Zayed bin Sultan Al Nahyan.

The two leaders reiterated their strong belief that only by espousing the principles of tolerance, inclusivity, non-interference and focusing on a people centric development agenda, the region could attain sustainable peace and stability.

Prime Minister Imran Khan thanked the UAE leadership and its people for their continued commitment to Pakistan's socioeconomic development in the shape of Pakistan Assistance Programme.

He thanked Sheikh Mohamed bin Zayed Al Nahyan for his support to eradicate polio from Pakistan.

The Crown Prince expressed his sincere appreciation for the warm welcome and hospitality extended to him and his delegation.

Later, Sheikh Al Nahyan returned to his country after completing the one-day visit to Pakistan.

As the visit concluded, Minister for Power Omer Ayub khan and senior government officers saw off the crown prince and his delegation at the Noor Khan Airbase.

Before departure, the crown prince was presented a photo album carrying photos depicting his engagements during the visit.

According to Foreign office, this was the third interaction between the leadership of Pakistan and UAE in less than three months, which was a testimony to the special nature of our brotherly relations with this important GCC country.

Both countries last week finalised the terms and conditions of a $6.2bn support package for Islamabad to help address the balance of payments crisis.

DUBAI - The United Arab Emirates has announced its intention to deposit US$3 billion in the State Bank of Pakistan in ...

UAE is Pakistan’s largest trading partner in the Middle East and a major source of investments. It is home to more than 1.6 million expatriate community which contributes around 4.5 billion dollars annually to the GDP.

Earlier, Pakistan and the UAE had resolved to strengthen bilateral trade and economic ties, besides fostering cooperation to deal with transnational organised crime, including money laundering, drug and human trafficking.