Suspects of hurling shoe at Nawaz Sharif released on bail 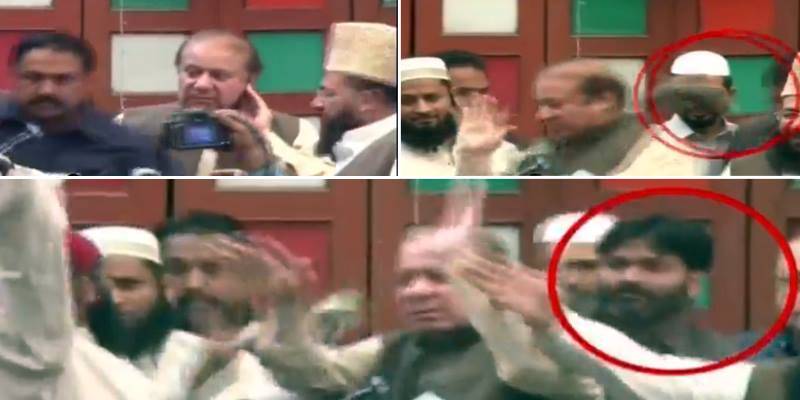 LAHORE - Three suspects under investigation for throwing a shoe at former prime minister Nawaz Sharif have been freed on bail.

A judicial magistrate has approved the bail for Sajid, Munawar and Ghafoor alias Falki against Rs100,000 surety bonds each.

On March 11, Nawaz Sharif came under a shoe attack during his visit to Jamia Naeemia in Lahore’s Garhi Shahu area.

Soon as Nawaz reached the rostrum to address a ceremony to mark the death anniversary of slain religious scholar Sarfaraz Naeemi at the seminary, a man from the audience hurled a shoe at him which hit the former PM on his shoulder.

Following the incident, in which Nawaz remained unhurt, three men were detained by the seminary’s administration.

LAHORE - Police on Monday registered an FIR against a man, who is accused of hurling a shoe at former Prime Minister ...

Later, Police registered a case against prime suspect and his two accomplices under Section 16 (Dissemination of rumours) of the Punjab Maintenance of Public Order Ordinance and Section 355 (Assault or criminal force with intent to dishonour a person, otherwise than on grave provocation) of the Pakistan Penal Code, read with Section 506 (Punishment for criminal intimidation).

The incident comes days after another PML-N leader, Ahsan Iqbal, had a shoe thrown at him in Narowal, making it the third incident of similar nature against the ruling party’s top leadership in recent days.

The person was taken into custody by the police; however, Asif said he should be released saying he has no enmity with him.