Anti-Rangers advertisement by Police official is a conspiracy against Karachi's peace: Spokesman

KARACHI (Staff Report) - The spokesman of Sindh Rangers on Wednesday termed the police advertisement against paramilitary force as a conspiracy against the peace of Karachi.

In a statement the spokesman said that allegations hurled against Sindh Rangers in the advertisement are completely false and baseless.

It further added the advertisement by a police official is part of a propaganda campaign against Rangers to downplay the efforts of paramilitary force to restore the law and order situation in Karachi. The Rangers have been thoroughly investigating into the advertisement.

According to the spokesman Sindh Rangers reserve its right to take legal action against the advertisement. 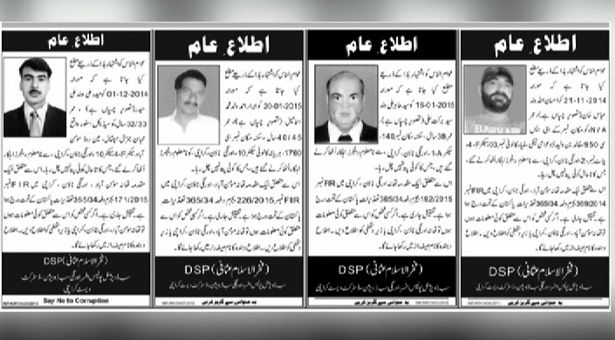 The advertisements appeared in various national newspapers read that the six missing persons had been taken away by unidentified Rangers personnel. The masses were urged in the ads to inform the DSP Orangi Town if they were aware of missing people’s whereabouts.

AIG Mehar said the ads were published without approval, adding that Sindh government’s information department assisted in publishing the ads.

He said cases were lodged against the Pakistan Rangers Sindh upon court orders. Summary of first information report (FIR) was attached with the letter sent to the newspapers for the advertisements.

Meanwhile taking notice of the matter, Sindh Home Minister Sohail Anwar Sial has ordered a probe into it besides suspending the DSP Orangi Town.

In a telephonic conversation with Inspector General Sindh Police Ghulam Haider Jamali, the home minister directed him to launch a swift investigation regarding publishing of controversial advertisements.

Sial has also formed a three-member inquiry committee, headed by the DIG counter-terrorism department (CTD), which is directed to present a report on the issue within three days.