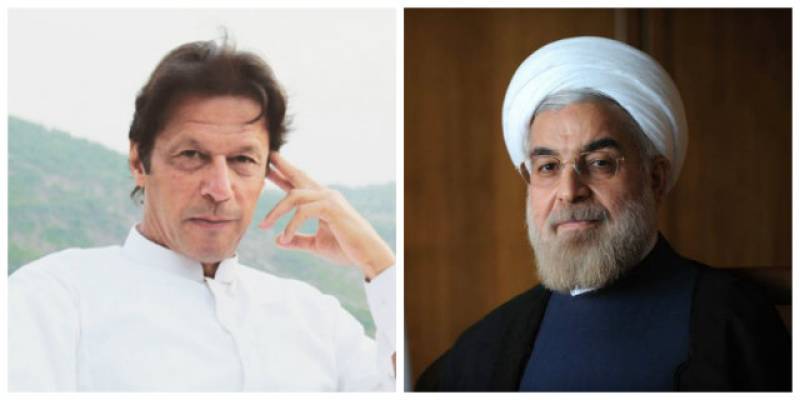 ISLAMABAD - Iranian President Hassan Rouhani on Wednesday invited Pakistan’s Prime Minister-designate ImranKhan for a formal visit to his country which the PM-elect has gladly accepted, according to Pakistan Tehreek-e-Insaf.

"Pakistan wishes to strengthen trade & diplomatic relations with Iran," the PTI chairman told the Iranian leader on a phone call.

Both leaders exchanged best wishes and love for the people of both neighbouring countries, it added.

President Rouhani said "Pakistan and Iran are not merely neighbouring countries but also bonded by religious and cultural values.

As soon as transfer of government completes, respective Foreign offices will finalize the dates for Imran Khan's visit to Iran, said a statement issued by the PTI.

Last week, Khan conveyed to Tehran’s envoy Mehdi Honardoost, who paid him a visit at his Bani Gala residence that the country wanted to play a constructive and positive role between Iran and Saudi Arabia.

Iranian Ambassador to Pakistan called on PM designate @ImranKhanPTI and senior leadership of PTI in Banigala to congratulate them on their victory in the elections, also discussed matters of mutual interest. #Pakistan #Iran #IranPakistan pic.twitter.com/xDQGP9dWXH

There has been a longstanding rivalry between Saudi Arabia and Iran with both sides on opposing sides of conflicts in the Middle East.

Honardoost told the former cricket legend that Tehran was ready to work with Islamabad in regional development and wanted to foster trade with Pakistan.

Earlier today, Acting US Ambassador John Hoover also called on Pakistan’s premier-in-waiting Imran Khan at his residence. He congratulated the PTI chief on his party’s victory in elections and discussed bilateral relations between the two countries.

Khan stressed that strengthening the bilateral relations based on trust was the need of the hour.

Reports in local media suggest Khan will be visiting the United States for first time as country’s premier in the next month after taking oath.

The incoming PM will attend 73rd United Nations General Assembly session in New York going to be held in the second week of September. He will also address the UNGA session to highlight Pakistan’s stance major issues, including grave human rights violations and Indian atrocities in the occupied Jammu and Kashmir, according to the reports.