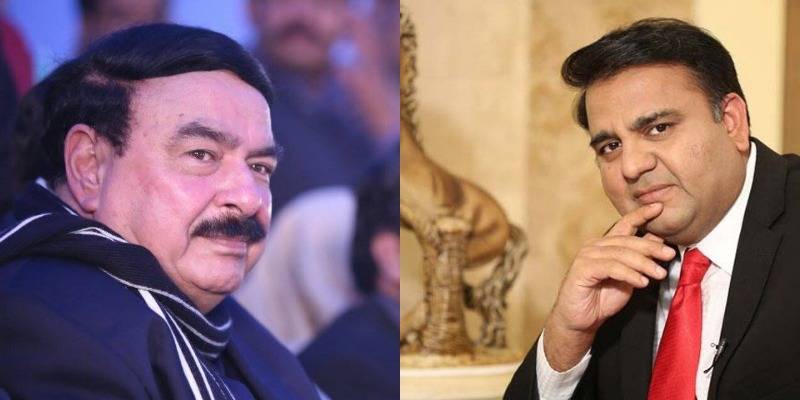 LONDON - In an interesting turn of events, Federal Minister for Information and Broadcasting Chaudhry Fawad Hussain on Saturday offered to vacate his position for Railways Minister Sheikh Rasheed Ahmad.

He tweeted, "I will be more than happy to vacate my position for Sheikh Rasheed sb and serve as MNA".

His response comes after the Awami Muslim League chief was heard speaking so to officials prior to formally addressing a presser in Lahore, revealing that he was offered the ministry of information by Prime Minister Imran Khan.

This point was much highlighted by local media, apparently referring to an internal conflict between the Pakistan Tehreek-e-Insaf (PTI) and its ally.

I will be more than happy to vacate my position for Sheikh Rasheed sb and serve as MNA, we all use trust powers bestowed by people of Pakistan and PM decides who is best fit in the role, However, till I am minister ll not bow to blackmailing of Advertisement lobby

The information minister further said, "We all use trust powers bestowed by people of Pakistan and PM decides who is best fit in the role, However, till I am minister ll [will] not bow to blackmailing of Advertisement lobby".

Rasheed, during the press conference, said that he had four meetings with the premier a day before, besides claiming that Khan had asked him to join the information ministry.

“I am working day and night for railways; I have no more courage,” said the AML leader.

Referring to information minister ongoing London tour, Rasheed asserted, “He has been enjoying a picnic in London for eight days. I have asked him to return.”

"I was not desirous of the ministry. But if the prime minister changes my portfolio, I will be grateful to him," he replied to a question.

Following the response from the information minister, Rasheed came forward to clarify the situation, stating that Fawad is like his brother and he can never imagine of taking over his seat.

The railways minister maintained that the picnic statement was given on a lighter note.

Amid a stir in the political scenario, Special Assistant to the Prime Minister on Media Iftikhar Durrani said that the premier was satisfied with the performance of the information minister.

Rejecting the claims of conflict between Rasheed and Fawad, he said that both ministers are good friends.

Another Special Assistant to PM Naeem ul Haque rejected as baseless the rumours about getting a resignation from the information ministry.

He added that PM Imran will chair a meeting to review the performance of the ministeries on Monday.

He went on to say that three months are not enough to judge the performance of a minister.

Foreign Minister Shah Mahmood Qureshi, commenting on the hot stock, said that Fawad Hussain was performing his duty in a better way.

He also expressed his ignorance about the claims made by the railways minister in the press conference.