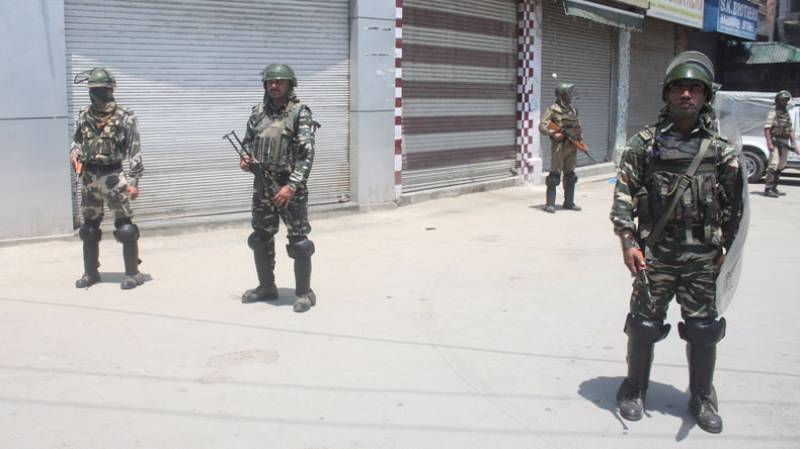 SRINAGAR – A complete shutdown is being observed today, to condemn India’s fiddling with the State Subject Law Article 35-A, ban on Jamaat-e-Islami and arrest of Muhammad Yasin Malik and other Hurriyat leaders under draconian Public Safety Act in the Indian Occupied Kashmir.

According to the Kashmir Media Service (KMS), call for the shutdown has been given by the Joint Resistance Leadership (JRL) comprising Syed Ali Gilani, Mirwaiz Umar Farooq and Muhammad Yasin Malik.

The JRL has also called for peaceful demonstrations after Juma prayers, today, to register protest against the stepped up Indian state terrorism in the territory.

Due to the shutdown, shops, public transport and other businesses remained closed across the valley.

The occupation authorities have imposed restrictions in several areas of Srinagar including Maisuma, Rainawari, Khanyar, Maharaj Gunj and Safa Kadal by deploying Indian troops and police personnel in strength to prevent people from staging anti-India demonstrations.

While Syed Ali Gilani continues to remain under house arrest at his Hyderpora residence since 2010, the authorities have also put Mirwaiz Umar Farooq under house detention at his Nigeen residence in Srinagar.