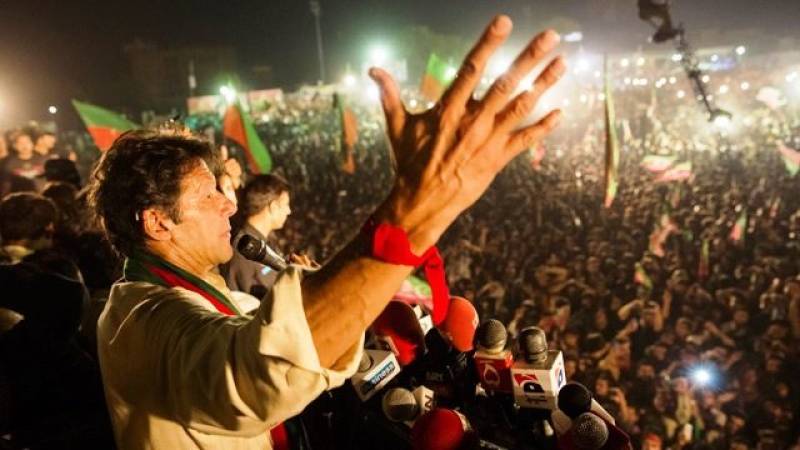 On September 17, you have to show that you stand with the judiciary. "Exercise your right to vote in favour of law," he remarked, adding "Your vote will empower the judges."

“Give it some thought before you vote in favour of Nawaz Sharif. Voting for him will mean that you have given the dacoits a free pass to do whatever they want. Remember that you have to vote against the dacoits."

"If you want to vote for the biggest dacoit then all the imprisoned petty criminals should be released," he said.

“I played cricket in Britain for 13 years after which I was able to afford a flat there,” he pointed out. We should ask PML-N leaders what business were Nawaz’s children doing that they became billionaires at such a young age, he urged.

"This is the time to change our path and bring about change."

"We live in a country where the powerful are never held accountable. The powerful can get away with anything," he said, adding that people have to come together against this injustice.

"Hopefully, Yasmin Rashid will prove to be victorious in this by-election," he added.

Earlier, Yasmin Rashid said that as a result of Imran Khan’s struggle, we saw the day when rule of law prevailed, adding that for the first time in country’s history the powerful politicians were brought before the court and held accountable for their actions.

We struggled a lot but our efforts bore fruit when the former prime minister was disqualified, she remarked. “Nawaz Sharif should be embarrassed. This constituency voted for him thrice but he did nothing for the people here.”

Directing PML-N leaders she said, “You should go and talk to people [in the constituency]. Only then you will realise what these people want.”

The NA-120 by-poll is not against any one person rather it is against the Punjab government, she claimed, alleging that their rivals are engaging in efforts to rig the voting process.