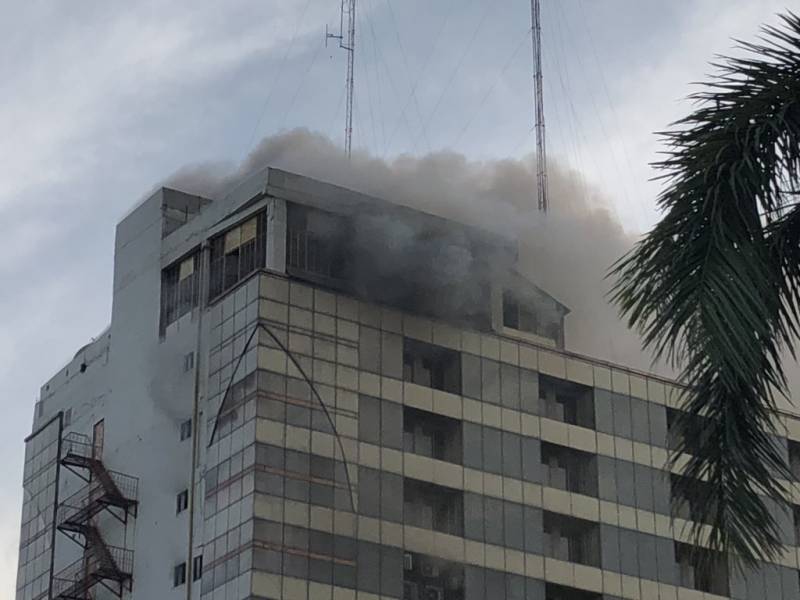 LAHORE - Documents related to companies like Saaf Paani and Punjab Power are feared to have gone up in flames in a massive blaze at a high rise on Saturday.

A man was confirmed dead after jumping out of the five-storey building at Lahore’s MM Alam Road, an elite shopping hub, in a desperate attempt to escape fire.

LAHORE - One of the two men, who jumped out of a shopping mall in a desperate attempt to escape the blaze, has been ...

Ali, who was declared a proclaimed absconder on the request of National Accountability Bureau (NAB) last month, is accused of receiving graft in excess of Rs12 million from Ikram Naveed, the former CEO of the Punjab Power Development Company (PPDC), and is the subject of a NAB probe.

The office of Ali Trading Company, which was dealing with these companies, is located on the same floor which caught fire on Saturday.

He had appeared before NAB investigators in April but has since missed his scheduled hearings and left the country for London.

The Anti-Corruption Establishment (ACE) had already carried out a probe against Naveed and Yousaf in 2016. It declared Naveed guilty of embezzling Rs450 million.

Earlier this year a Punjab Cooperative Bank building where the records of Ashiana and Paragon housing schemes were stored, caught fire. The records of these housing schemes as well as a number of others were on the sixth floor of the building and the fire managed to engulf the whole floor.