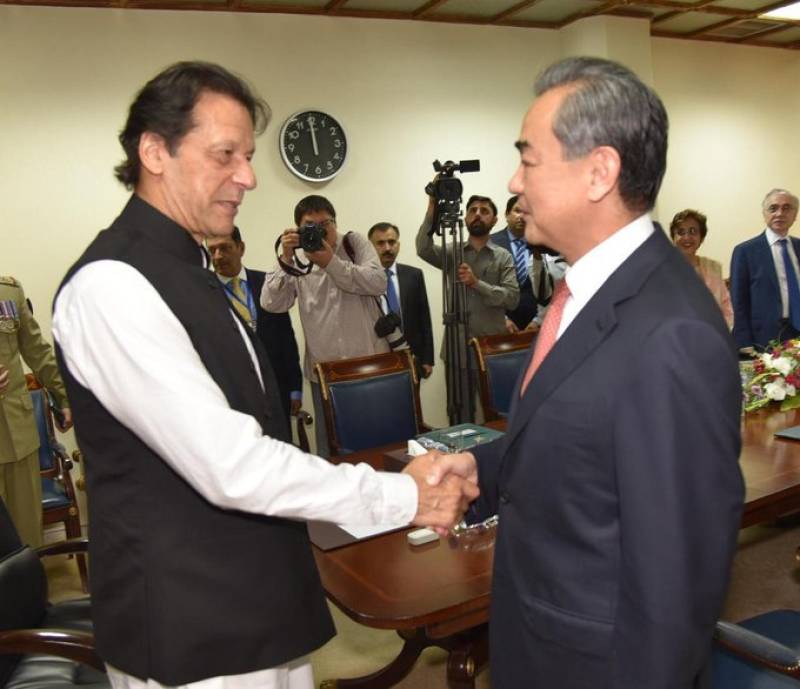 ISLAMABAD – Chinese State Councilor and Foreign Minister Wang Yi Sunday reiterated China's support for Pakistan in safeguarding its sovereignty, territorial integrity, independence and national dignity and said that Beijing had opposed any unilateral steps which complicated the situation of security in the region.

Yi called on Prime Minister Imran Khan, who said during the meeting that the ongoing curfew, continued lockdown, communications blockade, and massive human rights violations in occupied Kashmir have created a dire humanitarian situation, which needs to be urgently addressed.

Briefing the Chinese side on the evolving situation in Indian Occupied Kashmir following New Delhi’s unilateral and illegal actions of 5 August, the Prime Minister underscored that the curfew and other restrictions should be immediately lifted.

He stressed that in order to deepen strategic co-operation, Pakistan and China should continue their close coordination and consultation to ensure that peace and stability in the region is maintained.

Recalling the depth and breadth of Pakistan-China ties, Imran Khan underscored that friendship with China is the corner stone of Pakistan’s foreign policy.

He highlighted that ‘All-Weather Strategic Cooperative Partnership’ between the two countries is deeply rooted in mutual trust and respect and is an anchor of peace and stability in the region and beyond.

PM Khan said the CPEC is a project of great national significance that contributes immensely to the revitalization of Pakistan’s economy.

Speaking on the occasion, the visiting dignitary reaffirmed China’s support and reiterated opposition to any unilateral action as well as the measures by India that could further complicate the situation.

Both leaders agreed that more high-level exchanges should continue to take place between the two countries to further promote bilateral ties and shared goals of economic development, peace, and security across the region.

Earlier, the Chinese FM called on President Arif Alvi at the Aiwan-e-Sadr, where the president warmly welcomed Yi's visit to Pakistan and felicitated him on the 70th Anniversary of the founding of the People's Republic of China. 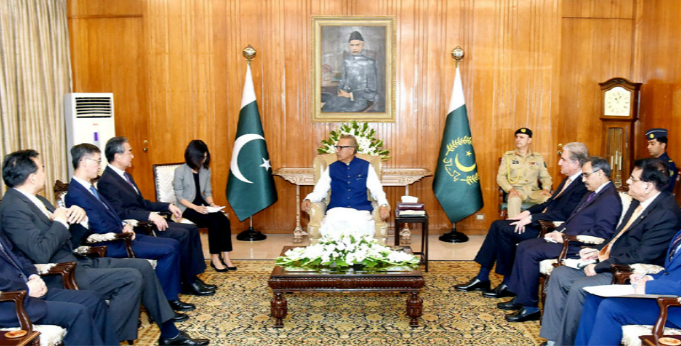 Briefing Yi on India's unilateral and illegal actions of August 5, which were aimed at changing the internationally recognized disputed status of Jammu and Kashmir as well as its demographic structure and identity, the president stressed that the inhuman lockdown continuing for 35 days imposed unspeakable suffering on the people of IOJ&K and created a dire humanitarian situation which needed to be addressed urgently.

He urged that the curfew, affecting nine million people, should be lifted allowing the suppressed people to at least meet their very basic needs.

Foreign Minister Wang Yi thanked President for the warm welcome accorded to him and his delegation.

Both sides reiterated that CPEC had entered a new phase of high-quality development. They agreed to continue to firmly push forward the construction of CPEC, complete its on-going projects, and realize its full potential by focusing on socio-economic development, job creation, poverty alleviation, industrialization, and agriculture.

The two countries reaffirmed their commitment of honoring the tradition of Pakistan and China supporting each others' respective core national interest.

The visit provided a strong impetus to further deepen and reinforce the time-tested friendship between both Pakistan and China and provided an opportunity to strengthen strategic communication and coordination between the two countries.

WASHINGTON – The United States government says it supports direct dialogue between Pakistan and India on Kashmir and ...