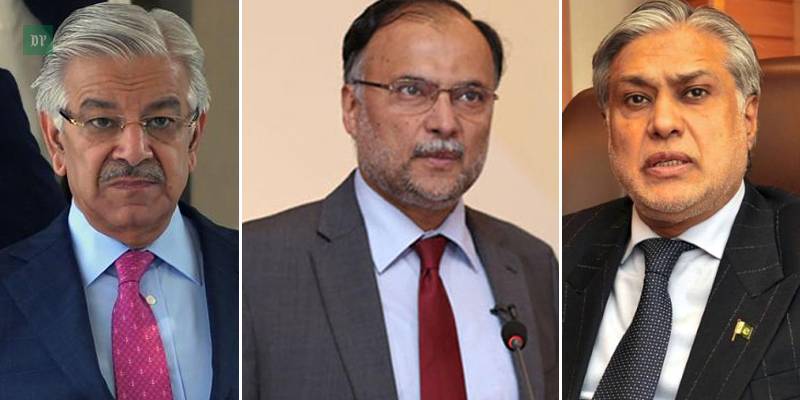 ISLAMABAD - A petition has been filed in the Supreme Court of Pakistan seeking disqualification of three federal ministers for holding Iqamas (foreign work permit) of United Arab Emirates (UAE).

The petition has been moved by the head of Khudai Khidmatgar organisation, Mahmood Akhtar Naqvi who has named interior minister Ahsan Iqbal, foreign minister Khwaja Asif and finance minister Ishaq Dar as respondents in his petition, alleging they concealed their offshore work permits and did not mention these in their nomination papers filed before the Election Commission of Pakistan.

LAHORE - Nawaz Sharif has been ousted from the post of Prime Minister House for the third time. But it’s still ...

The petitioner pleads that the ministers by not disclosing their work permits in their nomination papers for last General elections violated provisions of Representation of Peoples Act, 1976 and so should be disqualified under Article 62(i)(f) of the Constitution like former prime minister Nawaz Sharif.

He urged the court to invoke the relevant provisions of the law and disqualify the said ministers, considered close aides of former premier Nawaz Sharif.

The spokesperson for finance minister Ishaq Dar had refuted rumours that he was holding any iqama or dual nationality adding that after resignation from his post as a financial advisor in 2008, the iqama had expired.

However, interior minister Ahsan Iqbal confirmed that he was iqama holder although clarified that it was mentioned in his nomination papers and currently it was worthless as it had expired.

A statement by his ministry said Mr Iqbal had served as an advisor to the governor of Madina from 2004 to 2006 on a digital economy project.

It claimed that the minister had not taken any salary for the project since 2006, adding that he had declared his Iqama in his ‘documents’ in 2013.

The recently appointed defence minister Khawaja Asif also claimed that his iqama was mentioned in his papers. Apart from iqama, a work permit of Khawaja Asif also surfaced last month, implying that the politician was drawing around Rs1.43 million (in PKR) from a  UAE based firm.

Through another petition filed before the Supreme Court, Mr Naqvi also seeks disqualification of National Assembly member Hamza Shahbaz in the light of the allegations levelled by his alleged wife Ayesha Ahad.

The petitioner also urges the court to order the formation of a parliamentary committee to probe into the charges on the son of Punjab Chief Minister Shahbaz Sharif.

He pleads the respondent MNA has been found guilty of violating Articles 62 & 63 of the Constitution by hurling life threats at Ms Ahad. The petitioner asks the court to slap a permanent disqualification on Hamza Shahbaz.