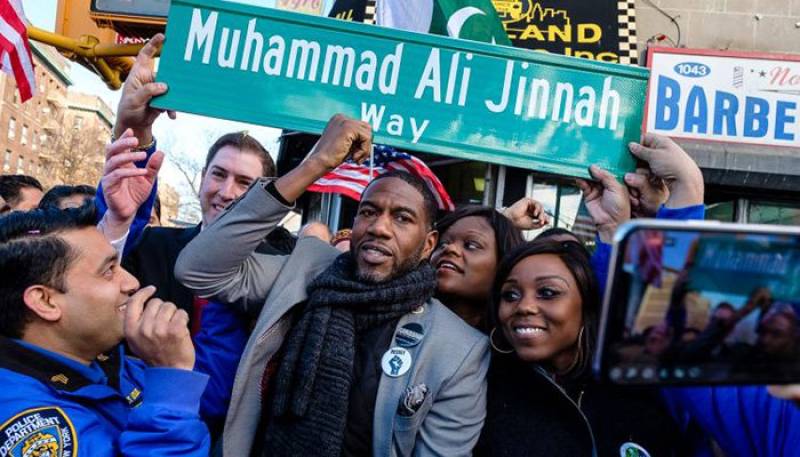 NEW YORK - Amid vociferous slogans of "Pakistan Zindabad", a section of a busy avenue in Brooklyn, a borough of New York City, which last December was renamed after Quaid-e-Azam Muhammad Ali Jinnah, was formally inaugurated at a largely-attended ceremony on Friday.

The decision to re-name the Coney Island Avenue, where the Pakistani community is concentrated, was taken on December 26 - Quaid's birthday- when the New York City Council adopted a resolution to honour the founder of Pakistan.

The move was the result of years of hard work and lobbying effort by the Pakistani community, especially the Pakistani-American Youth Organization (PAYO).

As Jumaane Williams, a city council member from Brooklyn who successfully piloted the resolution, unveiled, with the help of a string, the road sign "Muhammad Ali Jinnah Way" atop a pole, multi-coloured confetti was shot up in celebration, while Pakistani-Americans, carrying Pakistan's flags, burst into cheers and chanted slogans.

Pakistani Consul-General in New York, Naeem Iqbal Cheema, was a special guest at the event.

PAYO President Waqil Ahmad profusely thanked Williams and other city council members for their efforts in realizing their dream of having "Muhammad Ali Jinnah Way" in the area around the Coney Island Avenue, known as "little Pakistan.

"It is a gift to the Pakistani-American community here as well as to the people of Pakistan," he added.

Williams, the city council member, said it was an honour for him to serve the Pakistani community and to inaugurate the renamed avenue.

He said he was aware of the suffering members' Pakistani community had to endure following the 9/11 attacks.

But through resilience, the Pakistani community has now reached a point that the New York City Council bestowed a special honour on the father of their nation.

Consul General Cheema said that today's ceremony reflected the close relations and friendship between the Pakistani community and the New York City Council.

He paid tributes to the Pakistani community, specially PAYO, for their hard work and for raising Pakistan''s prestige in the United States.

Cheema said the Council's decision to honour the Quaid was a recognition of the great statesman, an outstanding lawyer and a revered political leader whose epic struggle resulted in the creation of Pakistan.