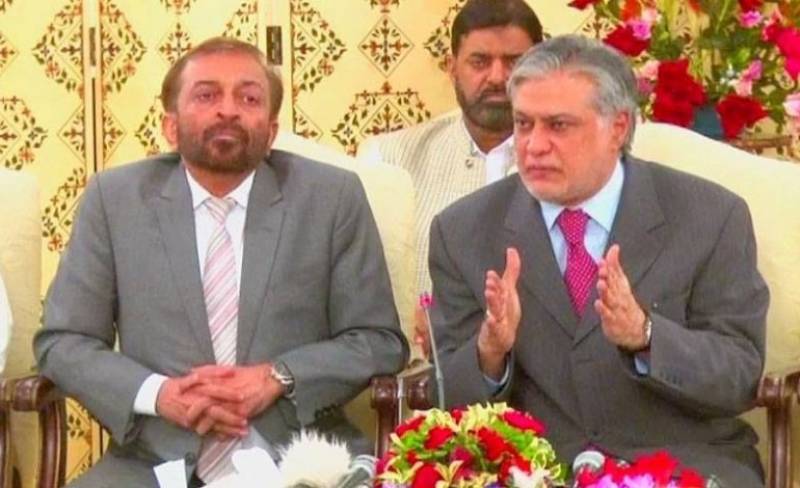 ISLAMABAD (Web Desk) - The Muttahida Qaumi Movement (MQM) has agreed to withdraw its resignations from Senate, National and Sindh Assemblies.

The government and MQM have signed a Memorandum of Understanding (MoU) and an announcement to this effect was made by Federal Minister Ishaq Dar with MQM leader Dr. Farooq Sattar at a news conference in Islamabad on Friday evening, Geo News reported.

A five-member Grievance Redressal Committee will be set up under the MoU which will look into alleged complaints of MQM. The committee will be given 90 days to dispose of complaints and present its report to the Federal Government.

Speaking to the media, Finance Minister Ishaq Dar said the PML-N government believed in national reconciliation. Dar added that MQM lawmakers would withdraw their resignations on Monday and other matters would be resolved soon. Dar also thanked the leadership of the MQM for their cooperation during the dialogue process with the government.

MQM leader Farooq Sattar said his party’s lawmakers resigned under duress. He added that MQM parliamentarians will begin withdrawing their resignations’ from next week. Sattar further said that political maturity had been shown by the government during the discussions.

In August, MQM resigned from Parliament and Sindh Assembly stating that it was being victimised in the Karachi operation. The party had called for the formation of a judicial commission to probe its claims of extrajudicial killing of party workers, a monitoring committee and release of innocent party workers.