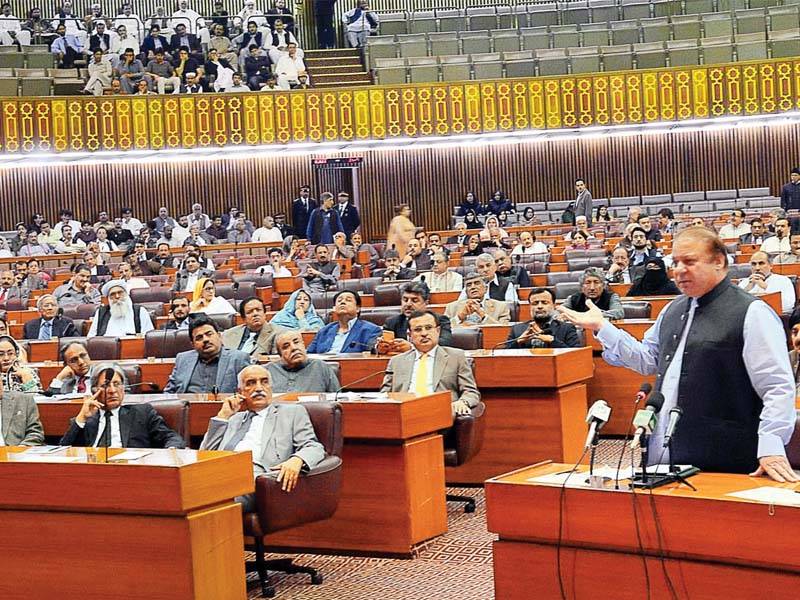 ISLAMABAD (Web Desk) - The Friday’s joint session of the Parliament unanimously passed a resolution expressing unequivocal support for Saudi Arabia, and affirmed that Pakistan will stand shoulder to shoulder with Kingdom of Saudi Arabia in case of any threat to its territorial integrity.

The resolution moved by Finance Minister Ishaq Dar urged the government to initiate steps to move the United Nations and the Organisation of Islamic Cooperation to bring about an immediate ceasefire in Yemen.

The resolution said Pakistan and other Islamic countries should work together for peaceful resolution of issue while promoting unity among Muslims.

At the outset, the chair congratulated the parliament and the people of the country on the historic constitution day being observed today. He said that it was forty two years back when the nation was gifted with a consensus document of constitution. He said the constitution respects diversity and enshrines rights for all segments of the society. He said it is our duty to defend each and every word of the constitution.

The House has now started debate on the evolving situation in Yemen.

Mohsin Khan Leghari said relentless efforts should be made to bring an end to conflict in Yemen. Voicing concern over the loss of precious lives in the conflict, he said, the matter should be resolved on the table of negotiations. He said Pakistan should play neutral role in the Middle East conflict in accordance with the contours of our foreign policy. “Given the situation on our borders, it will not be a wise decision to send troops to Saudi Arabia,” he opined.

He also appreciated the services of Pakistan Navy and the PIA for the safe evacuation of stranded Pakistanis from Yemen.

Ayaz Soomro said that Pakistan has always played a leadership role in Ummah. He said Pakistan can play the role of mediator in the current Middle East crisis. The prime minister and the ministers should visit different Muslim countries in order to defuse the tension in the Middle East.

Earlier, a meeting of parliamentary leaders held under the chairmanship of Speaker National Assembly Sardar Ayaz Sadiq in Islamabad.

The meeting is working on draft-resolution on Yemen crisis, which is expected to be tabled in the joint session of the parliament today.

Meanwhile, the Speaker National Assembly has expressed hope to evolve consensus among all political parties on the draft-resolution on Yemen crisis today.

Talking to journalists in the parliament on Friday, he said that Pakistan Tehreek-e-Insaaf has presented its draft-resolution on the request of Saudi Arabia regarding Yemen crisis.