Muslims look towards Pakistan for security and protection of Harmain Sharifain, says Imam-e-Kaaba 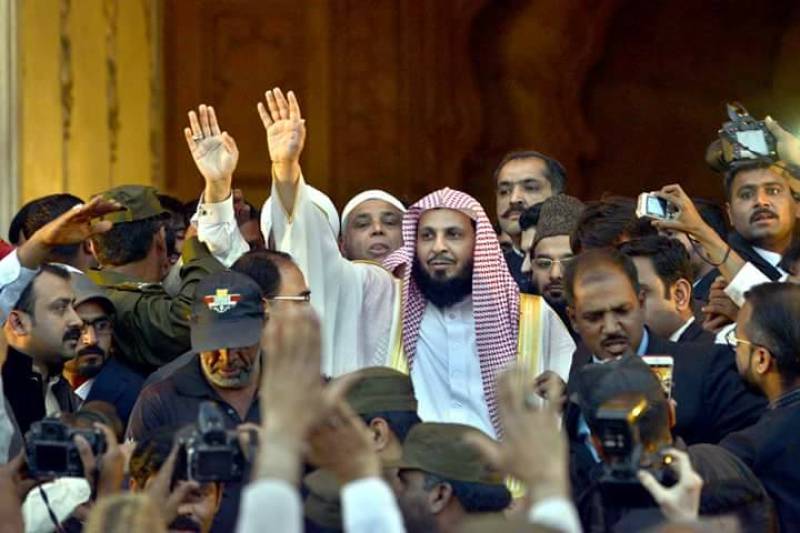 NOWSHERA - Imam-e-Ka'aba Sheikh Saleh bin Muhammad bin Ibrahim said on Sunday that Muslims across the world looked towards Pakistan for the security and protection of Harmain Sharifain.

Addressing the audience at the final day of three-day international moot of Jamiat Ulema-e-Islam-Fazl (JUI-F), the religious cleric said the cause of terrorism was the wrong interpretation of Islam and pleaded that terrorism should not be linked with Islam.

'Islam refrains us from taking part in any kind of violence. Ulema are united against terrorism and condemn it as it brings destruction,' he declared and added that Islam was not limited to a specific sect because it was the religion for the entire humanity.

He praised the JUI-F for arranging such a successful congregation for the unity of Muslims.

Imam-e-Ka'aba spent a busy Sunday as he led the Asar prayers in Model Town and then headed to the historical Badshahi Masjad for Maghrib prayers.

On Monday, Imam-e-Kaaba led Fajr prayers at Mansoora, Lahore and maintained that the enemies of the Muslims were exposing our sacred places to threats.

"Any threat to Kaaba is a threat to the unity of Muslim Ummah," he noted.

Speaking on the occasion, Jamaat-e-Islami (JI) emir Sirajul Haq said that defending Saudi Arabia was like defending the Muslim world.

"Pakistan and its people will not hold back from rendering any sacrifice for the protection of Islam's holy sites," he said.