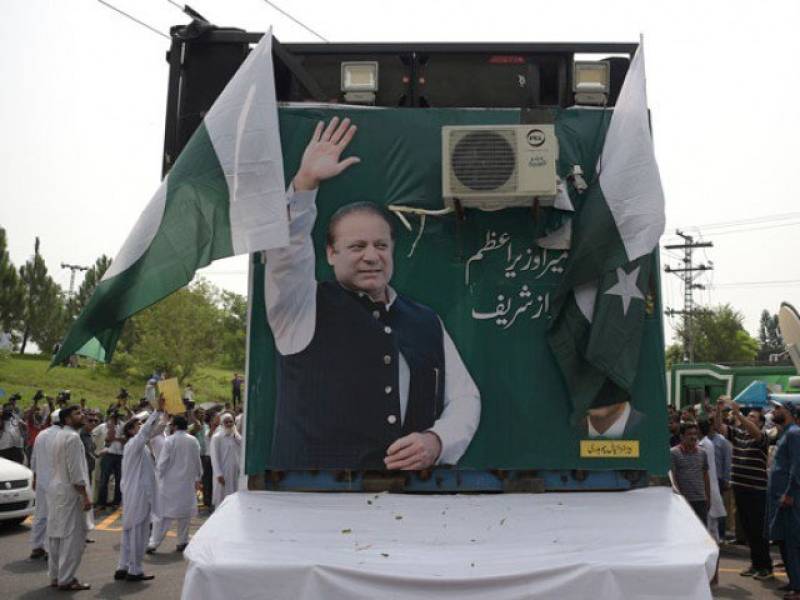 RAWALPINDI - The so called ‘homecoming’ rally of ousted prime minister Nawaz Sharif has reached Jhelum after leaving from Rawalpindi 's Ketcheri Bazaar with a relatively high speed as compared to the previous day.

The PML-N leader resumed a long road trip back to his hometown, Lahore, via the Grand Trunk (GT) Road on Thursday after an overnight stay in Rawalpindi’s Punjab House. 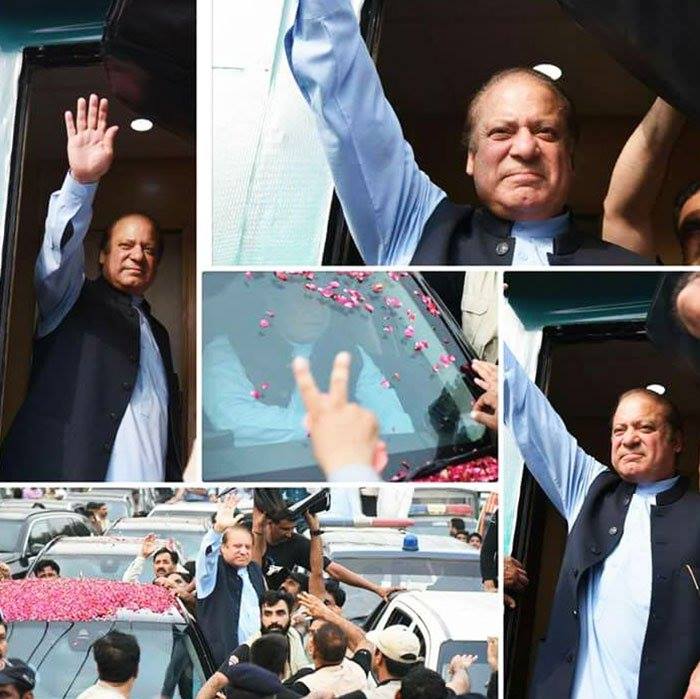 The rally, which kicked off Wednesday, covered a distance of some kilometres in over 12 hours to reach Rawalpindi from Punjab House Islamabad , a travel that usually takes 20 minutes in normal days.

GUJRANWALA - Former prime minister Nawaz Sharif on Friday resumed his road trip back to his hometown, Lahore, via the ... 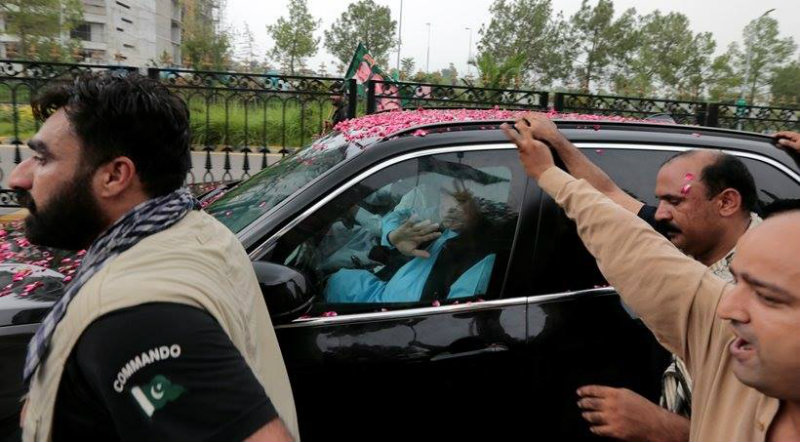 In his brief address at Sohawa , Nawaz Sharif expressed that he was punished for putting Pakistan back on track to progress.

"Do you accept the court's decision? Did you not vote for me as your prime minister? I have come out onto the streets with a case against your disqualification," he told them from inside his armoured vehicle.

"There are no allegations of corruption against me," he reiterated. "The honourable judges sent me home. Do you agree with their decision?" he asked.

“This is insult to 200 million voters in  Pakistan ,” Nawaz told his supporters.

Pakistan Tehreek-i-Insaf (PTI) Chairman Imran Khan hit out at Sharif's decision to address the crowd from inside his car in a tweet shortly after his speech.

Speaking from a bulletproof car doesnt inspire confidence in already-dwindling crowds. If you fear death you shdnt undertake "ppl's" rallies

"Speaking from a bulletproof car doesn't inspire confidence in already-dwindling crowds. If you fear death you shouldn't undertake 'people's' rallies."

In Jhelum , police have closed off one track of the road leading to the city. 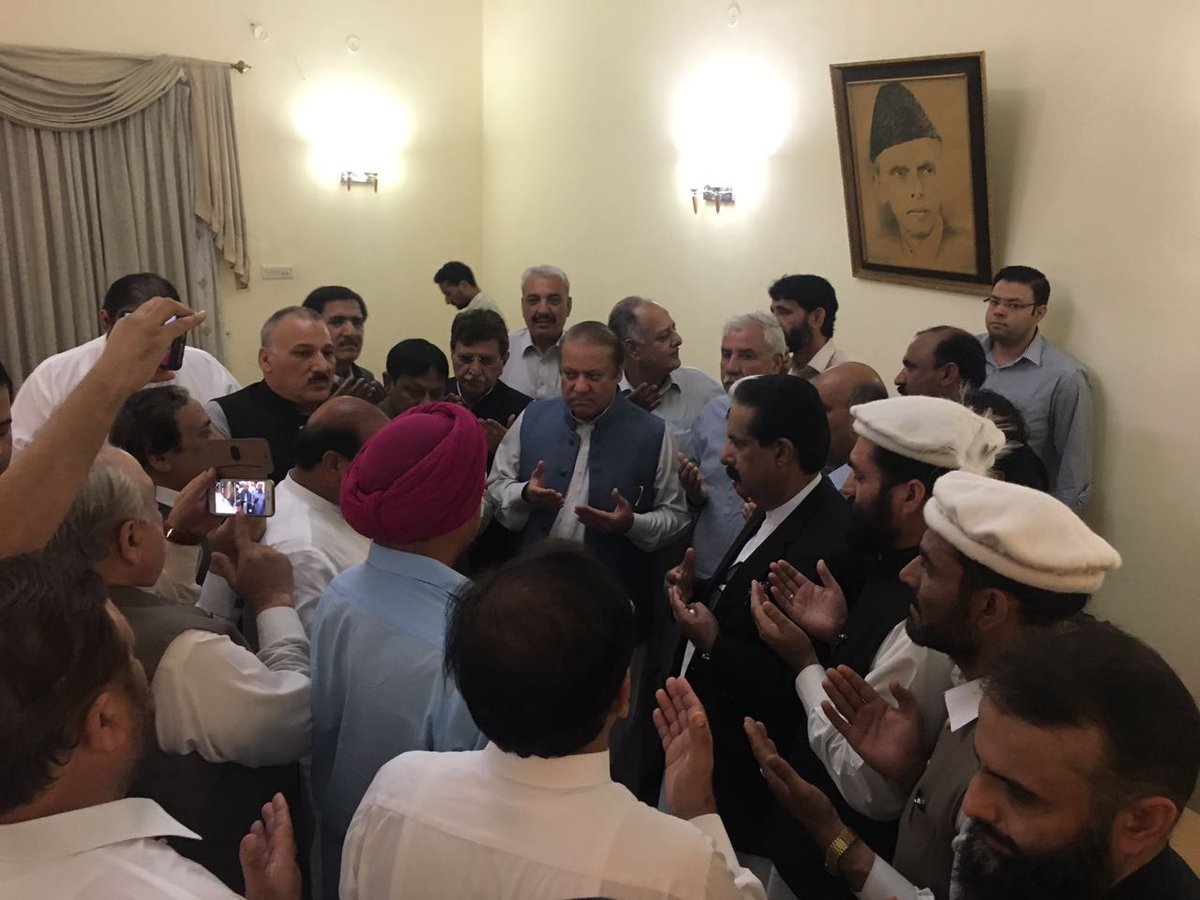 Female supporters and other workers of party have gathered at Kehcheri Chowk, from where Nawaz Sharif will head towards Lahore, to welcome their leader. Charged supporters are also dancing while enjoying the party songs, besides chanting slogans.

A heavy contingent of police have been deployed around the Punjab House.

It is being reported that the caravan will now stay at Jehlum, where Nawaz Sharif would address the public a second time.

Arrangements for receiving the former prime minister have been completed in Jehlum as welcome camps have been set up at different places for the caravan. A stage with bullet proof dais has also been arranged for Sharif's speech.

3:40 pm - The convoy of former premier is racing to Jhelum and the vehicle of Nawaz Sharif is leading the rally, away from his container.

In his first address to charged supporters at Committee Chowk in Rawalpindi , the ousted prime minister said that millions of people had voted to elect their leader but unfortunately a few had conspired to overthrow the democratic government.

“It happened with me for the third time. Is this not an insult to your vote?” Nawaz asked his gathered supporters.

“I ask you to pledge today that you will not let your mandate be disgraced.”

He said no prime minister in the country’s 70-year history had ever been allowed to complete his term. “This joke must end now. No one can be allowed to disgrace people’s mandate. I will not accept this and the people will not accept it [either],” he added.

In order to garner public support after being disqualified by the Supreme Court on dishonesty, former prime minister Nawaz Sharif on Wednesday started his journey from Islamabad to make his way back to home in Lahore.

As he came out from the camp office at 12:05 am, a large number of supporters received him chanting slogans in his favour.

RAWALPINDI – As the disqualified PM Nawaz Sharif is rallying towards his hometown from Murree with thousands of his ...

During the rally, PML-N leaders, including Talal Chaudhry, Khawaja Saad Rafique, Daniyal Aziz and others greeted their supporters and addressed to maintain the zeal.

A bomb-proof container has been arranged for Nawaz Sharif to lead a rally to Lahore. 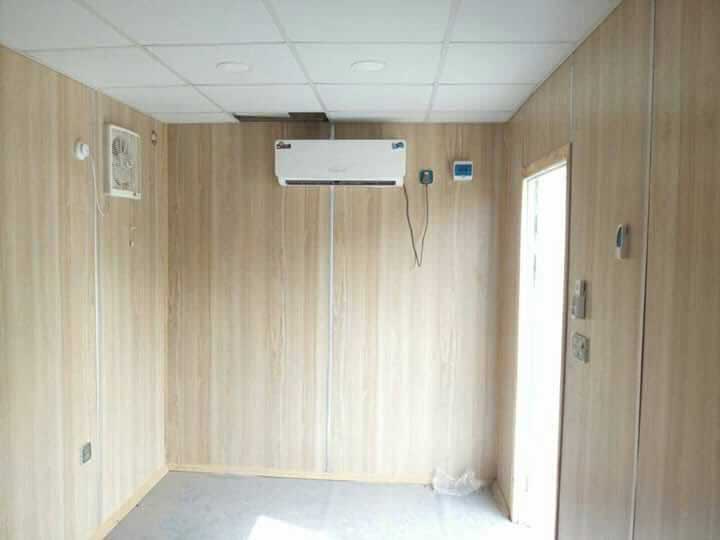 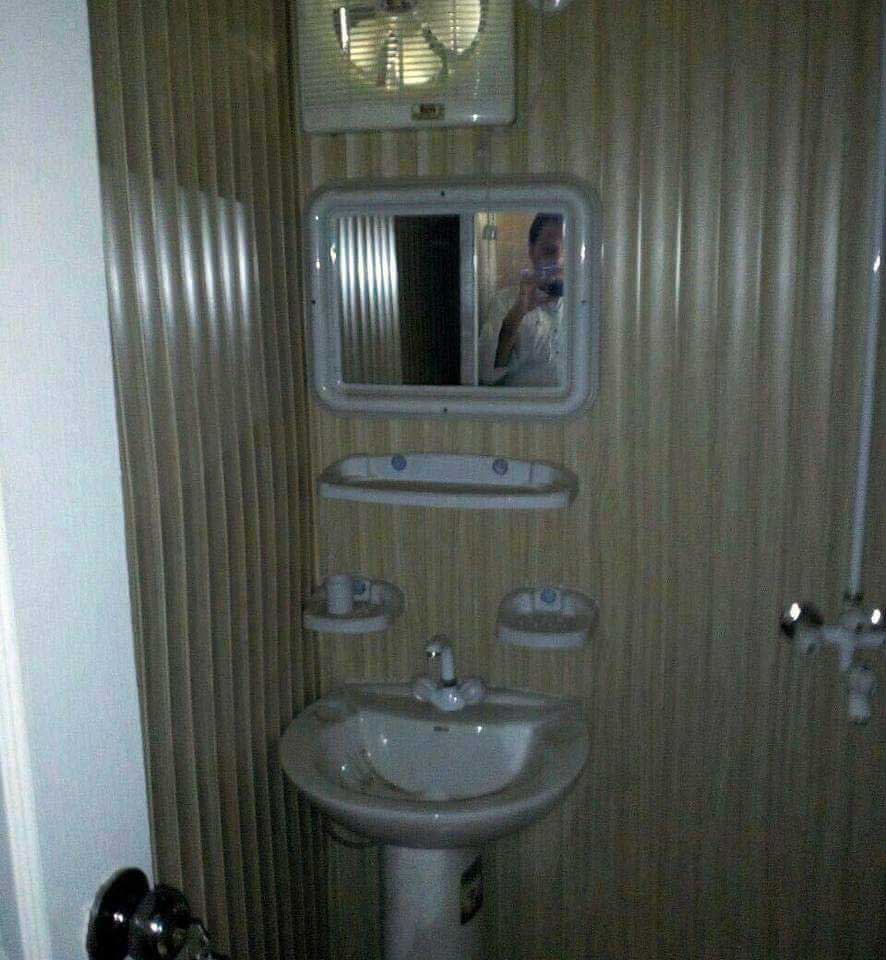 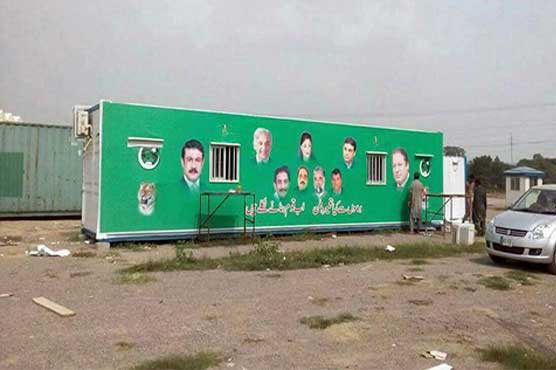 All the modern facilities, including AC, drawing room, bed room have been provided in the container.

Earlier, the former premier was scheduled to leave for Lahore on Sunday but the plan was changed due to security concerns.

According to local media, Nawaz was informed about potential threats and asked to use other routes, but he defied all threats and selected GT Road as route for his way back to home.

Sources said that a large number of Sharif’s supporters wanted the ex-PM to return to his hometown Lahore by road.

Maryam Nawaz, who wanted to accompanying her father in homegoing rally, was forced by her father to leave for Lahore a day earlier apparently due to looming threats.

She tweeted as stating, "I wanted to accompany him so requested. He refused. His word is the last for me. Baap ka hukam".

I wanted to accompany him so requested. He refused. His word is the last for me. Baap ka hukam. https://t.co/DuFTtgbQZG

Seeking protection from Almighty Allah for her father, she posted pictures of her departure on Thursday.

Abu seeing us off as we leave for Lahore..... Entrusted my beloved to Allah... May Allah protect him from all evils.

On Tuesday, Punjab’s Information Minister Mujtaba Shujaur Rehman revealed that the rally will take three days to reach Lahore instead of single day.

On the other hand, a close aide to Nawaz Sharif , Asif Kirmani said that they are unable to give a final time frame for this road show.

In an advisory, the owners of restaurants, hotels, shopping plazas and other shops situated on the route have been directed to keep their businesses closed in order to prevent any untoward situation.

According to 92 News, Metro Bus Service has also been suspended in Islamabad and Lahore ahead of the rally. Such steps are creating hurdles for public in carrying out routine work and reach offices, local media added.

Since the ex-prime minister announced his decision to hold homegoing rally, his political rivals have been criticising his decision.

On Tuesday, Pakistan Awami Tehreek chief Dr Tahirul Qadri asked the former prime minister to name the one against whom rally is being conducted after disqualification.

PTI chief Imran Khan asked Nawaz, “What message are you trying to convey to the people by rallying through the Grand Trunk road?” he asked Nawaz.

“The Sharifs are trying to pressurise the National Accountability Bureau (NAB), but that will not happen,” Khan asserted.

“They [the PML-N] are ruling in the centre and in Punjab , then who are they protesting against?” Khan asked.

It seems that Nawaz wants to go to any length against the apex court, he stated.

Addressing a public gathering at Nasir Bagh on Tuesday, AML head Sheikh Rashid said that Nawaz's rally will put the lives of common people in danger, adding that ousted PM will be responsible if any incident happens.