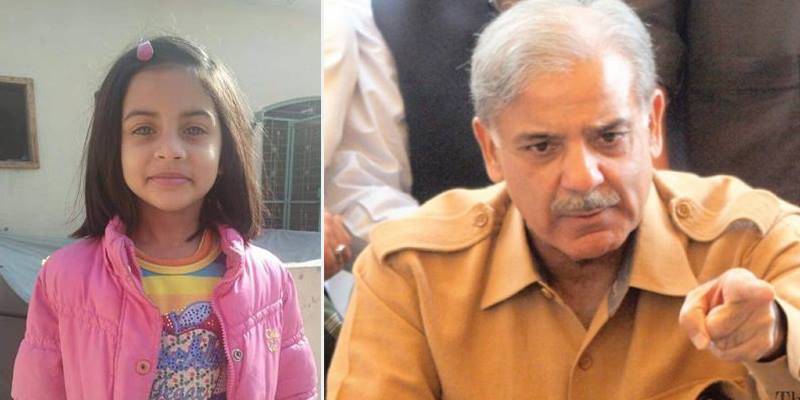 LAHORE - Chief Minister Shehbaz Sharif on Wednesday ordered the authorities to immediately arrest the rapist-killers of a seven-year-old girl in Kasur a day after she was found dumped in a rubbish pile in the Punjab district.

Responding to the shocking incident, the CM summoned a report from the IGP over the gruesome killing within 24 hours, and expressed deep sympathy with the victim’s parents.

Kasur DPO Zulfiqar Ahmad has been made OSD, while a Joint Investigation Team (JIT) led by Additional IGP Abubakar Khuda Bux has been formed. The JIT will be comprised of members of Inter-Services Intelligence (ISI) and Intelligence Bureau (IB).

Seven-year-old Zainab was found raped and killed, five days after she had gone missing from her home. Police say the girl was kidnapped near her home when she was on her way to take a Quran class. Her parents were in Saudi Arabia to perform Umrah.

Chairing a special meeting, the CM made it clear to the authorities that verbal commitments would not work, as such sorrowful incidents would not be tolerated at any cost. He also stated that police officers should also be investigated for showing negligence, directing the forensic lab to expedite the process for Zainab's autopsy.

Shehbaz assured the parents that he would personally monitor the investigation, and “justice will be dispensed at all costs”.

Earlier in the day, the chief minister took to Twitter to condemn the rape-murder.

Deeply pained about murder of a 8-year old girl in a child molestation case. Those societies that cannot protect its children are eternally condemned. Not going to rest till the perpetrators of this dastardly act are apprehended & given severest possible punishment under the law

In a recent development, the home department has called Rangers in the district following the violent anti-police protests near the DC Office.