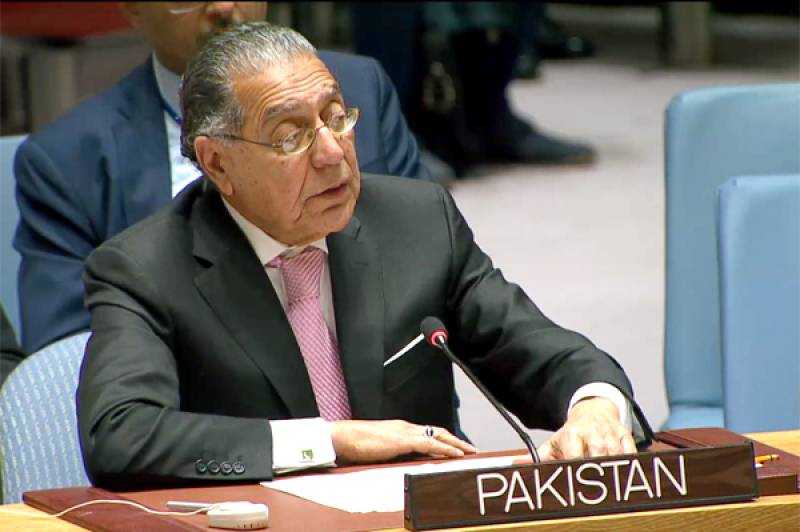 UNITED NATIONS - Drawing attention to India’s “aggressive intent” towards Pakistan, a top Pakistani diplomat has urged the UN to act “decisively” to prevent a war between the two countries and to enable the Kashmiri people to exercise their UN-pledged right to self-determination for peace and stability in South Asia.

“Pakistan does not want war with India,” Ambassador Munir Akram told the UN Security Council which held a debate on upholding the U.N. Charter, the organization’s founding treaty, nearly 75 years since its adoption.

At the same time, the Pakistani envoy warned that if attacked, Pakistan will respond “resolutely and effectively”, as was demonstrated in February last year.

Signed in June 1945, the UN Charter promised to save future generations from the devastation of war.

But Ambassador Akram pointed out that the world order, based on the Charter, is eroding amid resort to unilateral force, foreign occupation, conflict and ideologies of hate, including Islamophobia, anti-Semitism and fascism. Old political and military blocs are being resurrected, and new ones built, while global growth is declining under the weight of trade and technology wars.

Also eroding, he added, was international cooperation to address global challenges, like poverty and climate change.

“The United Nations is often deliberately marginalized,” he told the 15-member council on Thursday.

Pakistan, he said, seeks to build a new structure of sustainable peace with its neighbours,

Referring to Prime Minister Imran Khan’s consistent stand for political — not military — solution to the conflict in Afghanistan, Ambassador Akram hoped that the US-Taliban talks, facilitated by Pakistan, would soon result in an agreement enabling the withdrawal of foreign forces, a cessation of violence, an intra-Afghan dialogue and the elimination of terrorism from Afghanistan.

The Pakistani envoy also cited Prime Minister Khan’s efforts to reduce tensions in the Gulf region. “We will not become a party to any regional conflict,” he said, adding, “We will always be a partner for peace.”

“Recent events have amplified the multiple and complex threats to peace and security in the Middle East: denial of self-determination to the Palestinian people and disruption of the sovereignty and stability of Iraq, Syria and Yemen,” he said.

Calling “unilateral measures” imposed on Jammu and Kashmir “a first step” in India’s efforts to suppress Muslims and claims that normalcy has been restored “false and duplicitous”, Ambassador Akram warned that India could initiate another “military adventure” against Pakistan.

India, he said, has issued new political maps, laying claim not only to Indian occupied Jammu and Kashmir but also Azad Kashmir and Gilgit-Baltistan.

“The signals from India of aggressive intent towards Pakistan are unmistakable,” the Pakistani envoy said, referring to the recent threats issued by Indian politicians and military officials.

India, he said, committed over 3000 ceasefire violations along the Line of Control (LoC) in the disputed Kashmir region in 2019. It had cut the fencing in 5 places and deployed Spike anti-tank and Brahmos cruise missiles along the LoC.

Ambassador Akram added, “Pakistan requests the Security Council, and the Secretary-General, to act decisively to prevent a disastrous war between Pakistan and India; to call for an end to the grave human rights violations in occupied Jammu and Kashmir, and to enable the Kashmiri people to exercise their right to self-determination promised to them in the resolutions of this Council.”

Opening the debate, UN Secretary-General Antonio Guterres, noting that 2020 marks the 75th anniversary of the Organization, said the New Year has begun with fresh turmoil and long-standing suffering, with geopolitical tensions – most recently in the Gulf – reaching dangerous levels and trust within and among nations on the decline.

In the United Nations, including the Security Council, he said, member states are struggling or failing to find common ground, while the climate crisis is growing in fury. At this time of global divisions and turmoil, the Charter of the United Nations remains a shared framework of international cooperation for the common good and a reminder of the primacy of the rule of law and human dignity.

The principles contained within it – including non-intervention, self-determination, the sovereign equality of member states and clear rules governing the use of force – have saved lives, advanced economic and social progress and avoided another world war, the UN chief said.

But when those principles are flouted, put aside or applied selectively, the result has been chaos, death, disillusion and mistrust, he said.

Guterres, therefore, encouraged member states to “come home” to the UN Charter, the defining document of the international community.