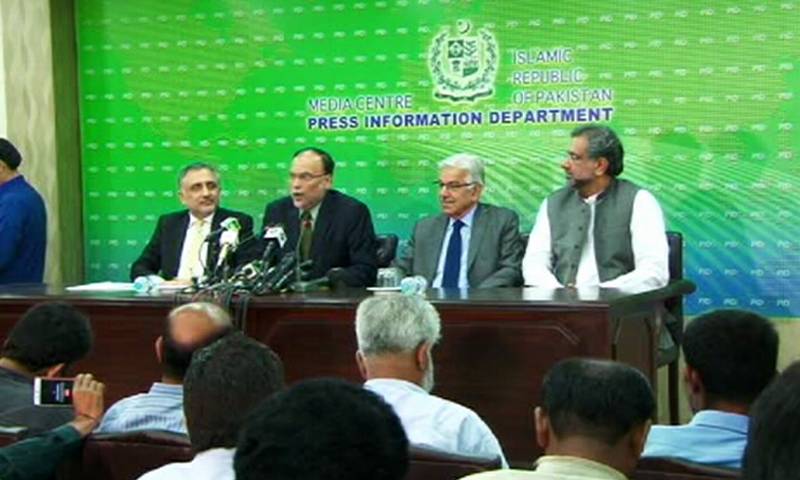 ISLAMABAD - Defending the Sharif family, the ruling Pakistan Muslim League has rejected the report of a Joint Investigation Team (JIT) submitted in the Supreme Court on Monday.

The Minister of State for Planning and Development Ahsan Iqbal, appearing in a press conference with other senior PML-N leaders, strongly rejected the JIT's report as 'worthless trash' which "served Imran Khan's agenda."

Choosing to focus on the fact that the report focused on the Sharif family's personal businesses rather than mismanagement or corruption while holding public office, the minister termed it a compilation of political accusations against the government.

"This report is a political statement which reads like an Imran-nama," the minister said.

Barrister Zafarullah Khan, also speaking in the press conference, said: “It is not a JIT report, its rather a PTI report.”

"Four out of the six members of the JIT had no prior experience in handling legal investigations,” he added, which undermined its credibility.

The Defence Minister Khawaja Asif said that the government would fully contest the JIT report in the apex court, adding that it has firm faith in the judiciary.

Asif said that he was under the impression that the report contained strong evidences, but it leaned heavily on Rehman Malik’s statements.

"This is witch-hunt not justice," added the defence minister.

Meanwhile, Federal Minister for Petroleum and Natural Resources Shahid Khaqan Abbasi said that the JIT report was a reminder of the tenure of former military ruler Musharraf, where baseless allegations were rampant.

Several things in the report are unbelievable and comical, said the federal minister.

He added that Hasan and Hussain Nawaz don’t live here and are overseas Pakistanis.

Earlier today, the Joint Investigation Team (JIT) submitted its final report to the Supreme Court in the Panama Leaks case.

The JIT has recommended filing of a reference against Prime Minister Nawaz Sharif and his sons Hussain and Hasan Nawaz with the National Accountability Bureau (NAB).

The JIT has observed major disparities in the finances of the Sharif family and their known and declared sources of income.