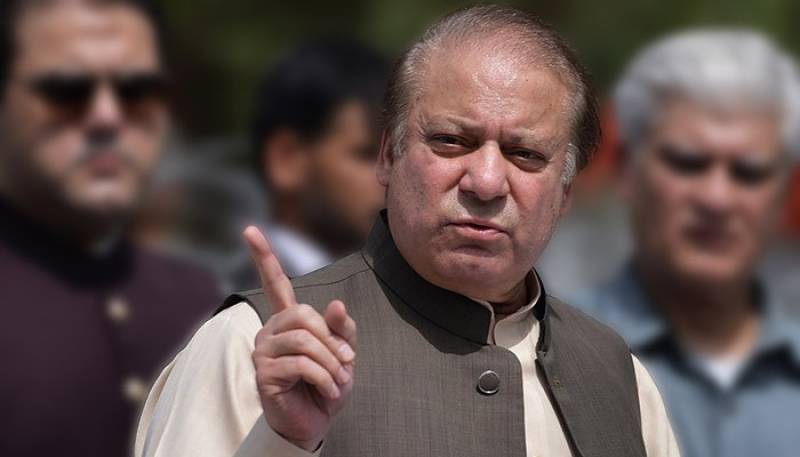 "It is proven now how the head of an institution made my media trial his mission," the ousted PM said in an emergency presser at the Punjab House in Islamabad on Thursday.

Sharif, who stepped down from the country's top office following his disqualification by Supreme Court last year, added that severity of the allegations could not be ignored.

He asserted that "the anti-graft body has lost all its credibility after initiating a probe into baseless allegations of transferring $4.9 billion to India".

The ex-premier, who was flanked by his daughter Maryam Safdar, further alleged that conspiracies were being hatched to forge new cases against him and to sentence him in these cases.

"I will neither file clemency appeal nor apologise if convicted in ongoing corruption cases," Nawaz Sharif announced.

On Tuesday, the NAB chairman ordered to verify the allegations against Sharif and others for laundering huge sums of money to India.

ISLAMABAD – The National Accountability Bureau (NAB) has clarified its orders regarding probe against former prime ...

In a press release, the anti-corruption watchdog took notice of the media reports regarding alleged transfer of $4.9 billion to India by the ex-PM and others.

In an informal talk with reporters inside the court, Nawaz Sharif hailed PM Shahid Khaqan Abbasi’s statement about NAB’s functions, adding that the anti-graft watchdog was misusing the authority in many cases.

ISLAMABAD - Taking a strong exception to the inquiry against Nawaz Sharif regarding the 'baseless' allegations of money ...

Demanding to abolish the NAB laws introduced during Pervez Musharraf regime, Nawaz Sharif said that the former military dictator had designed it (NAB) for his vested interests. “We could not concentrate on this law while staying focused on development works,” he said.