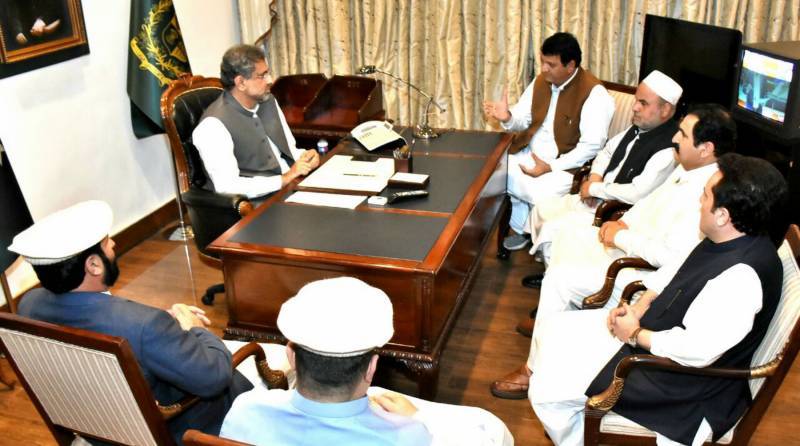 ISLAMABAD - Prime Minister Shahid Khaqan Abbasi has reiterated its commitment to bring Federally Administered Tribal Areas (Fata) at par with other provinces following the recommendations made by the Fata reforms committee amid protests against delay in mainstreaming of the area.

However, the delegation expressed its complete confidence in the leadership of the prime minister, Radio Pakistan reported.

On Monday, thousands of protesters from the Fata gathered near Islamabad’s D-Chowk to protest against the delay in the implementation of Fata reforms and demanded the early merger of the tribal areas with Khyber Pakhtunkhwa.

The protesters had initially planned to stage a sit-in at D-Chowk but were stopped by police from proceeding to the area.

Among the demands put forward is the representation of tribal people in the KP Assembly and convening of a meeting of the Council of Common Interests on the matter. The protesters are also seeking amendments to the Constitution to extend the jurisdiction of the superior courts to Fata.

The demonstrators said that their protest will continue till President Mamnoon Hussain signs the Fata merger into law.

Jamiat Ulema-i-Islam-Fazl, however, has not joined the protest. Yesterday, JUI-F chief Maulana Fazlur Rehman said that the FATA-KP merger issue was being used by certain elements for political gains.

“The decision to merge Fata with KP has been made by the people of Fata,” ANP President Asfandyar Wali Khan said, asking the government to have “mercy” and abolish the Frontier Crimes Regulation.

PPP leader Syed Akhunzada Chattan said that the people of Fata had no peace and their human rights were being violated.

“There is havoc in Fata,” Chattan said, demanding that Fata be given it’s right to the National Finance Commission award. He said the government is yet to announce a budget for Fata.

If the government had implemented the reforms, this day would not have come, Chattan added.

Jamiat Ulama-i-Islam-Sami (JUI-S) chief Maulana Samiul Haq said that “some people in Islamabad do not believe that Fata is part of Pakistan.”

The joint protest rally by the leadership of Pakistan Tehreek-e-Insaf and ANP started from Peshawar and headed towards Islamabad earlier in the day.

The protesters, including political activists from the tribal areas, left from the Peshawar toll plaza.

“The participants of the rally will stage a sit-in at Islamabad Press Club, and if the government does not take notice on our first sit-in, then the next sit-in will be held at D-Chowk,” senior ANP leader Mian Iftikhar Hussain said.

Hussain said that the joint rally demanded from the federal government to immediately abolish FCR, adding that if their demands were not accepted they would prolong the sit-in.

PTI Chairman Imran Khan had also directed his party workers, MNAs and MPAs to take part in the protest. During a press conference in Peshawar on Friday, Imran had demanded a Fata-KP merger before the 2018 general elections.

A 24-point reforms package regarding local government (LG) system, education and jobs opportunities for youth and upgradation of Levis Force and other had been sent to the President following the approval of the federal cabinet.

The reforms have been approved for the seven agencies, including Khyber Agency, South Waziristan, North Waziristan, Mohmand, Kurram, Bajur and Orkazi, of the tribal region.

Prime Minister’s then Adviser on Foreign Affairs Sartaj Aziz, who was also heading the reform committee, had said that merger of Fata with KP would be completed in five years.

“We had four options for mainstreaming of Fata — to keep the status quo, to form a council on the pattern of Gilgit-Baltistan, to form a separate province or to merge it with KP — and we opted for the last one,” Dawn News quoted Aziz.

He explained that the five-year transition period would be utilised to prepare Fata for restoration of a enduring peace.