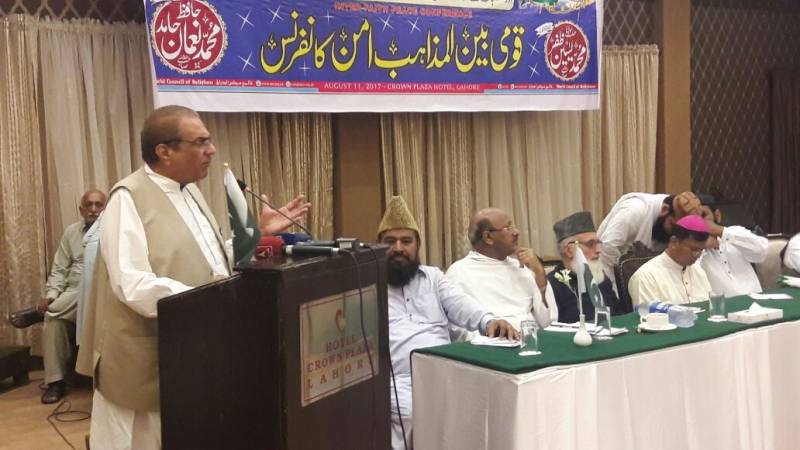 LAHORE - The World Council of Religions (WCR) on Friday organised a peace conference to mark the National Minorities’ Day to express solidarity with the minorities in Pakistan.

Participants of the conference highlighted the need for removing the discrimination made on the basis of religion and called on all stakeholders to ensure the protection of minorities’ rights in Pakistan as shared responsibility.

Scores of peace-loving national and international personalities attended the session and expressed their thoughts.

They passed a unanimous resolution which stated that “protecting the rights of minorities is our shared responsibility and terrorism in the name of religion is not acceptable”.

Supporting the military operations, including Operation Zarb e Azb and Raddul Fasaad, the resolution highlights that all Muslim and non-Muslim scholars among restive segments of the society are behind the state and its armed forces.

Addressing the conference, renowned journalist Mujeebur Rehman Shami said, "The Constitution guarantees equality regardless of race, colour or religion". He also stressed the need of raising and enforcing job quota for minorities in Pakistan.

Punjab Minister for Minorities Affairs and Human Rights Tahir Khalil Sandhu, on the occasion, said that terrorism in the name of religion was continued in Pakistan despite the fact that all faiths preach peace to their followers.

Sandhu stressed the need of dispensing justice at all levels for bringing long term peace in the world.

Counting the Punjab government’s feats to ensure the protection of minorities’ rights, the minister said that provision of free loans to minorities by Punjab Chief Minister Shehbaz Sharif was an exemplary initiative.“This scheme will be beneficial for unemployed and common man,” he added.

WCR Executive Director Hafiz Muhammad Nouman said that Pakistan had been created, in fact, for protecting the rights of minorities. “Unsafe minorities mean we are not following the aims set for getting Pakistan,” he said in his address at the conference.

“We need to review our education policy to promote peace, justice and social equality, besides removing discriminations based on religion,” he added.

Maulana Mohammad Yasin Zafar while expressing his views said: “WCR is a representative organisation of all religions of Pakistan which launched effort for establishing peace in 2004.

“People from all religions and sects are gathered at the platform of this organisation (WCR), which will be able to realise its aim of eradicating extremism if government and media come to support it,” he shared. “No Muslim can usurp the rights of minorities,” he added.