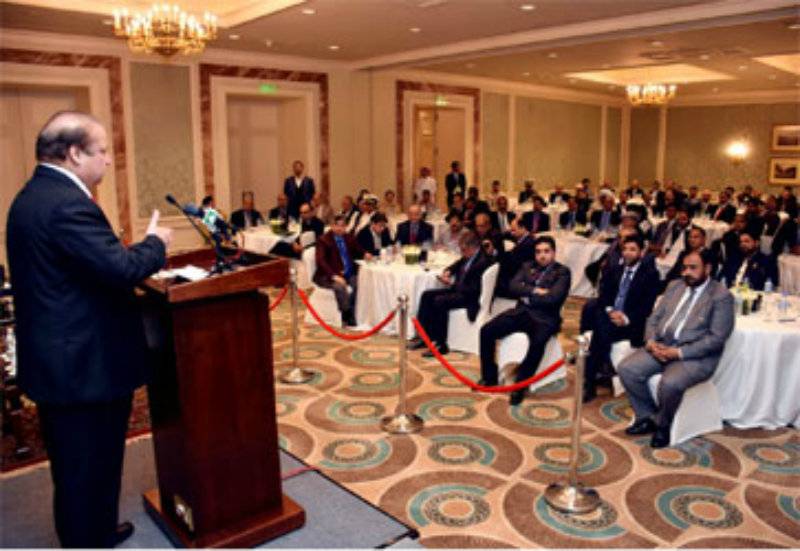 Addressing Pakistani community in Qatar on Thursday, he said we want to promote relations with Qatar in trade and investment.

The Prime Minister said bilateral trade relations between the two countries are very low and there is need to increase it. He said trade volume will be increased from three hundred million dollar to one thousand million dollars this year.

The Prime Minister the Government is working on a number of energy projects including LNG, coal, hydel, solar and wind to overcome energy shortage. He said we will end electricity shortage in the country and also lower the rates of electricity.

He said the LNG agreement signed with Qatar is historic and of great importance to address the gas crisis back home. He thanked Qatar for provision of LNG on best price.

Referring to the economic performance, Nawaz Sharif said the economy has been turned around and the gains made over the past few years have also been appreciated the world financial institutions. He said foreign exchange reserves today stand at the record level.

Nawaz Sharif said the government is also expanding the network of motorways and work on Lahore-Karachi motorway has been started. He said he will soon perform the grounding breaking of this important project.

Nawaz Sharif said China Pakistan Economic Corridor project will bring prosperity not only in Pakistan but also the entire region. He said the network of Railways is being upgraded while state of the art Gwadar port and airport will be built under the CPEC.

Nawaz Sharif said Pakistan International Airline will be put on the path of development and efforts will be made to bring it at par with Qatar Airways.

On the security front, the Prime Minister said overall situation has improved as a result of Zarb-e-Azb operation which has broken the back of terrorists. He vowed that the war on terror will be taken to its logical conclusion. He said law and order situation has also improved in Karachi and the people of provincial capital feel more secured today.

He said a splendid air show was demonstrated by JF Thunder.

He invited overseas Pakistani to invest in Pakistan in different fields. He said the Government is making the rules and regulations easier so that they will not face any difficulties.

The Prime Minister said the Government is giving attention on education and health sectors and good results are coming out.