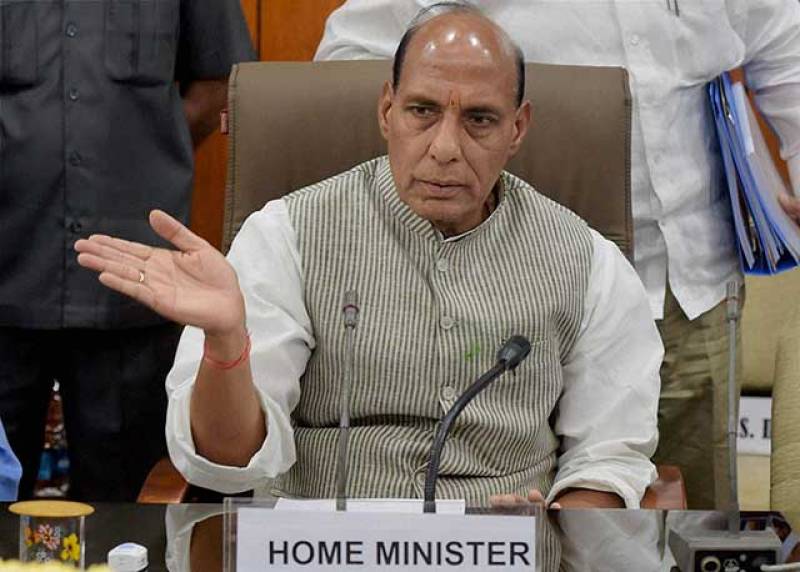 NEW DELHI - Turning up the war rhetoric against Pakistan, India’s home minister Rajnath Singh has said that India would divide Pakistan into ’10 pieces’ if it cannot stop cross-border terrorism.

Rajnath’s tirade against Pakistan came as he was addressing a political gathering in the restive region of Kashmir. He also accused Pakistan of destabilising India.

“A neighbouring country time and again encourages terrorism and terrorist activities to harm India,” The Times of India quoted Rajnath Singh as telling the gathering.

“Pakistan has been divided into two countries. If it does not stop cross-border terrorism, it will soon be in 10 pieces,” he ranted.

Accepting the geographical truth that India could not change its neighbours, Rajnath said that India would not bow down its head before anyone.

Tensions between Islamabad and Delhi have been at an all-time high ever since Indian security forces killed popular Kashmir separatist leader Burhan Wani in July this year. Over 150 Kashmiris have been killed and more than 15,000 injured due to the use of brute force by Indian forces to quell the ensuing protests.

Since then, the two nuclear-armed neighbours have been locked in a standoff along the Line of Control and the Working Boundary due to regular ceasefire violations by India which have cost both civilians and military personnel their lives.

Islamabad has denounced both Delhi’s accusations and its ceasefire violations as attempts to detract attention away from mass protests in Occupied Kashmir which erupted after Wani’s killing.

Pakistan has also accused India of carrying out subversive activities, particularly in Balochistan and Karachi, in a bid to destabilise the country.

Earlier this year Pakistani security officials arrested senior RAW operative Kulbhushan Yadav and obtained a video confession in which he admitted that his country was involved in sabotage attempts in Pakistan.

Tensions increased further in the aftermath of the Uri attack on a check post in Kashmir that left 18 people dead. India blamed Pakistan for the attack, but Pakistan refuted the allegations. They were further aggravated after Indian claims of conducting a surgical strike inside Pakistan.