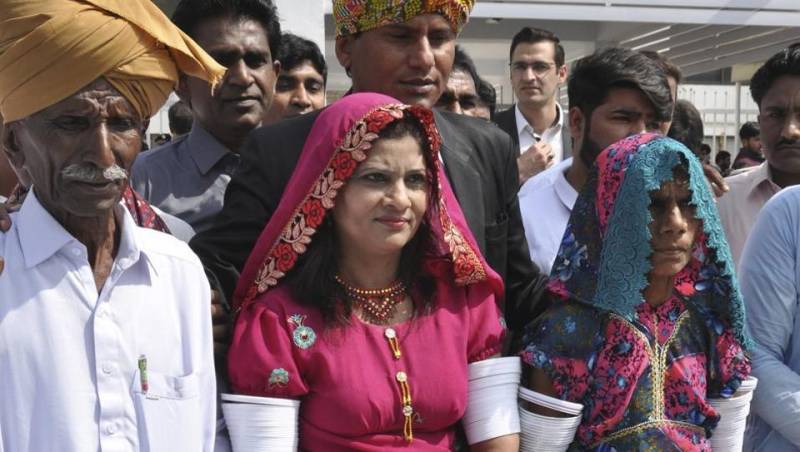 Kolhi, 39, was among 51 legislators who were sworn in as the members of the upper house of the Muslim-majority country.

Kolhi, who belongs to a remote village in Nagarparkar district of Thar in Sindh province, is a member of Bilawal Bhutto Zardari-led Pakistan Peoples Party (PPP).

Presiding officer Sardar Yaqoob Khan Nasar administered the oath to the senators elected on March 3 by the federal and provincial assemblies.

Former finance minister Ishaq Dar, an accused in the Panama Papers scandal, was not present to take the oath as he is in London for treatment.

Kohli was elected Senator on a minority seat from Sindh.

She reached the parliament house with her family in a traditional Thari dress, a trademark of Tharparker district of Sindh province.

She told the media that she would work to improve the healthcare and water shortage issues along with efforts to resolve problems faced by the women of Tharparkar.

Her election represents a major milestone for women and minority rights in Pakistan. Earlier, PPP had elected the first Hindu woman named Ratna Bhagwandas Chawla as a senator.

Born to a poor peasant, Jugno Kolhi, in February 1979, Kolhi and her family members spent nearly three years in a private jail owned by the landlord of Kunri of Umerkot district.

She was a grade 3 student at the time when held captive. She was married to Lalchand at the age of 16, when she was studying in 9th grade.

She pursued her studies and in 2013 she did masters in sociology from the Sindh University. She had joined the PPP as a social activist along with her brother, who was later elected as chairman of union council Berano.