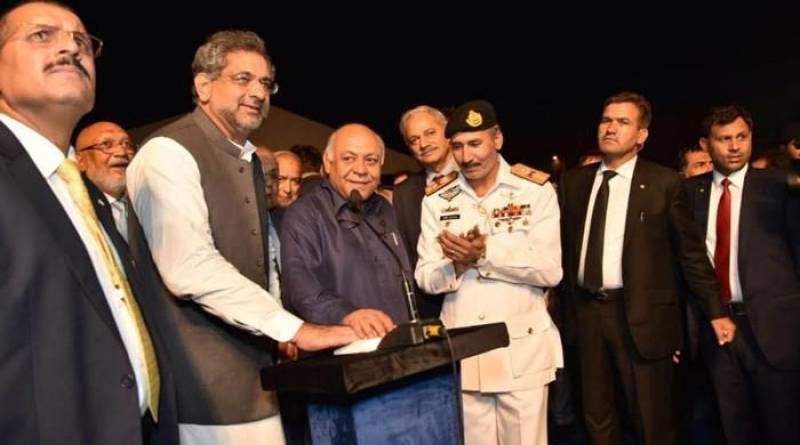 “The Deep Water Container Terminal has made Pakistan a major hub for regional countries,” the premier said, adding that the port would also connect Pakistan to the rest of the world.

The high-tech terminal, supervised by Karachi Port Trust (KPT), is built at a cost of $1.4 billion.

The port had successfully handled four of world’s largest containerships during test operations on December 9, 2016.

It is capable of handling mother vessels having a loaded capacity of up to 18,000 20-foot containers, terminal officials reported earlier.

The port has a capacity of handling 3.1 million TEUs (Twenty Feet Equivalent Unit) per annum, higher than the previous capacity of all container terminals in the country of 2.5 million TEUs.

The terminal was named as Hutchison Ports Pakistan, which is a public-private partnership of Karachi Port Trust (KPT) and Hong-Kong-based Hutchison Ports.

“The terminal will be a key component (of the) overall CPEC system, assisting and facilitating CPEC developments in Pakistan, which governments of both Pakistan and China are pursing vigorously,” Abbasi said.

Assuring KPT employees that their issues would be resolved on a priority basis, the prime minister announced a bonus equaling one-month salary to all workers on the successful launch of the Hutchison Port Pakistan.

He said that he was announcing this in the presence of Finance Minister Miftah Ismail.

Besides, the port would also include KPT’s integrated power project, encompassing an LNG terminal, along with four 600-megawatt power plants and a desalination plant capable of producing over 50 million gallons of clean water.