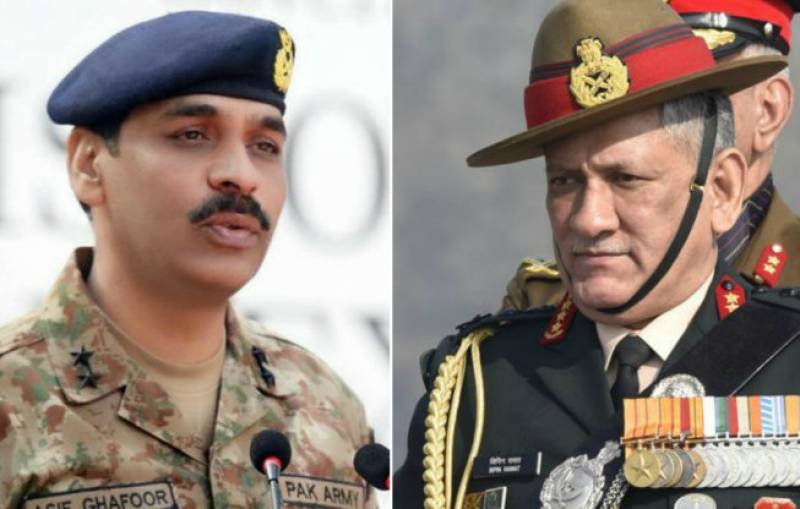 "We believe COAS is a very responsible appointment and four star is a rank with age-long experience and maturity,” said Director General of Inter-Services Public Relations (ISPR) Maj Gen Asif Ghafoor on Saturday.

India’s army chief on Friday said his forces were ready to call Pakistan's "nuclear bluff" and cross the border to carry out any operation if asked by the government. "We will call the (nuclear) bluff of Pakistan. If we will have to really confront the Pakistanis, and a task is given to us, we are not going to say we cannot cross the border because they have nuclear weapons. We will have to call their nuclear bluff," Gen Rawat said.

Terming it as “irresponsible,” the ISPR chief said that such statements are unbecoming from a person of a responsible stature.

Speaking to state TV's world service, the military spokesman said that Pakistan has a credible nuclear capability, exclusively meant for threat from the east. "But we believe it’s a weapon of deterrence not a choice."

ISLAMABAD: Foreign Minister Khawaja Asif on Saturday said that India may test Pakistan’s resolve if that is what it ...

When asked what if India undertakes any misadventure against Pakistan, Ghafoor said, "Well, it's their choice. Should they wish to test our resolve they may try and see it for themselves."

Responding to a question about New Delhi role in destabilising Pakistan through state sponsored terrorism, he said if India could overpower Pakistan through conventional engagement post-overt nuclearisation, it could have done that by now.

"The only thing stopping them is our credible nuclear deterrence as there is no space of war between the two nuclear states," the general said.

"That’s why they are targeting us through sub-conventional threat and state-sponsored terrorism."