Imran Khan is not our 'Ladla’, clarifies CJP 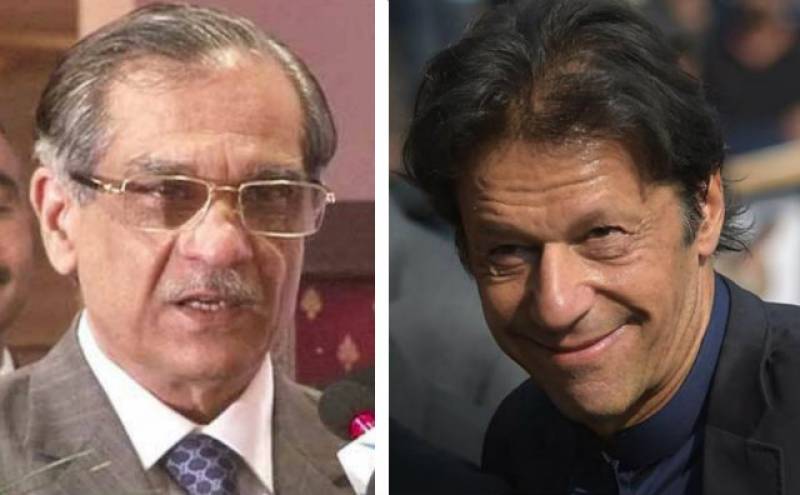 The CJP, while hearing the Bani Gala encroachment case, said that the apex court has not given the PTI chief any concession at any point.

State Minister Tariq Fazal Chaudhry told the apex court that the Capital Administration and Development Division (CADD) — and not the Supreme Court of Pakistan — had decided to regularise the illegal constructions in Bani Gala area to facilitate "not only Pakistan Tehreek-i-Insaf (PTI) chief Imran Khan but one million residents" of the area.

The CJP then said: "Imran Khan is not our ladla (blue-eyed boy). The statements issued in this regard are incorrect. Let's call [Minister of State for Information] Marriyum Aurangzeb and show her the CADD minister's statement."

“I challenge anyone concerned to prove me wrong,” said the top judge.

Following last year's Panamagate verdict — in which PML-N leader Nawaz Sharif was disqualified as the prime minister — the party leadership, including Nawaz himself and his daughter Maryam, stepped up its criticism of the judiciary and often dubbed Imran Khan as the "ladla — the favourite, the blue-eyed boy, of the kingmakers".

Upon this, the chief justice remarked that the minister would have to appear before the court and explain her statement, otherwise face the consequences.

"Why was Marriyum Aurangzeb issuing statements about the court providing concession to Imran Khan? Why do you want to defame the courts?" he asked.

The chief justice observed that at one point the CADD minister said Imran Khan submitted forged documents submitted to the court. “What action did you take if the submitted documents were found to be fake,” the CJP asked. To this, the state minister told the court that no action was taken because the matter was sub judice.

“The court has not stopped you from taking any action. You are free to proceed with legal action if you intend to do so,” the CJP remarked.

Justice Nisar, heading a three-member bench, was hearing a suo motu case based on a letter by Imran Khan. The PTI chief had invited the court’s attention towards the large scale encroachment on the botanical garden, uncheck and unplanned construction in Bani Gala, massive denuding due to large scale tree felling and pollution of the Rawal Lake due to sewage.

The chief justice ordered to refer the issue of constructions around Korang Nullah to the federal ombudsman. He asked all affectees to submit their applications before the ombudsman within two days.

The hearing of the case was adjourned for two weeks.