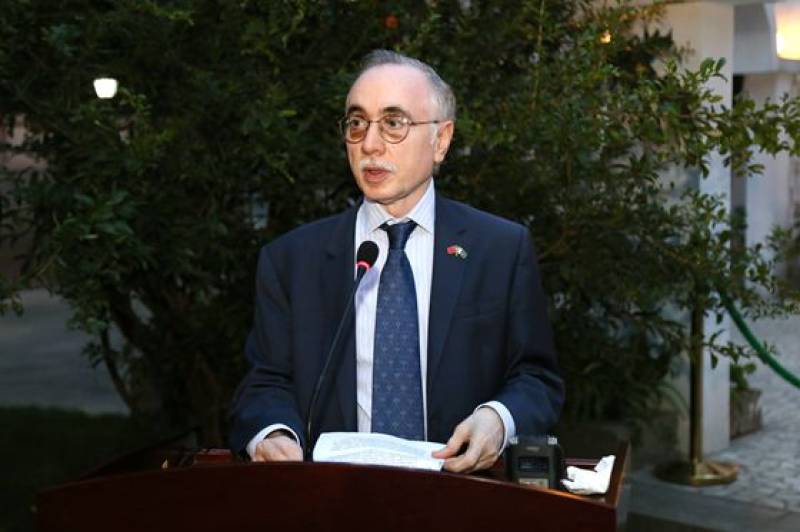 BEIJING - Defence Day of Pakistan was commemorated at the Embassy of Pakistan in Beijing on Tuesday with traditional enthusiasm and solemnity.

The celebration was aimed at paying homage to martyrs of the 1965 war as well as to those brave souls who rendered sacrifices in the defence of Pakistan.

To mark the occasion, a reception was held at the Pakistan House with Lieutenant General Peng Bo, Deputy Commander of PLA Army as the chief guest.

The event started with the National Anthems of Pakistan and China after which Lieutenant General Peng Bo and Ambassador Masood Khalid along with Defence Attache Brig. Ahmed Bilal cut a cake.

Welcoming the guests, Ambassador Masood Khalid said Defence Day is commemorated as a tribute to our valiant Armed forces and to their inherent patriotism, discipline, and commitment.

"Pakistan seeks a peaceful and prosperous neighborhood which is the key principle of Pakistan’s Foreign Policy," he said, however, lamented that despite sincere efforts by Pakistan, India has refused dialogue with Pakistan to resolve outstanding issues. Instead of addressing the Jammu and Kashmir dispute, India has unleashed a reign of terror in Indian occupied Kashmir. He reaffirmed Pakistan’s political, moral and diplomatic support to the just cause of the Kashmiri people.

"Instead of addressing the Jammu and Kashmir dispute, India has unleashed a reign of terror in Indian occupied Kashmir" the envoy added and reaffirmed Pakistan’s political, moral and diplomatic support to the just cause of the Kashmiri people.

The Ambassador also highlighted the sacrifices of Armed forces of Pakistan in the fight against terrorism and reaffirmed Pakistan’s resolve to root out terrorism.

He thanked the Chinese Government and PLA for their friendship and support.

Other guests of the prestigious event included Ambassadors and members of diplomatic corps, Defence and Military Attaches, Chinese government officials and members of the media. Pakistani diaspora in China also participated in the event.

The large attendance at the occasion was a testimony to the strong ties between Pakistan and China and the militaries of the two countries.