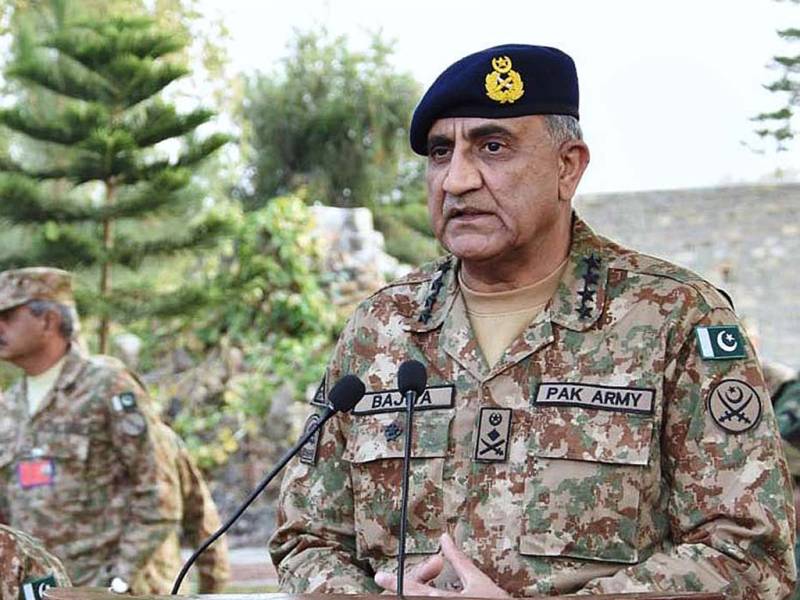 ABBOTTABAD - Pakistan is a peace loving country and seeks harmonious and peaceful co-existence with all countries, especially its neighbours, the country’s top military commander said on Saturday.

However, General Qamar Javed Bajwa, who was addressing the passing out parade of 137th PMA Long Course, 8th Mujahid Course and 56th Integrated Course held at Pakistan Military Academy in Kakul, said this desire for peace must not, in any sense, be construed as a sign of weakness.

“Our valiant armed forces are fully prepared to respond across the full spectrum of threat in a befitting manner,” the Chief of Army Staff (COAS) added.

Highlighting Pakistan’s political and moral support to the basic right of self-determination for the people of Jammu & Kashmir, Gen Bajwa said the peace loving innocent citizens of Kashmir are being subjected to one of the worst form of state terrorism. “It is high time for the world community to wake up and play its positive role to bring peace to that unfortunate part of the subcontinent,” he urged.

Pakistan believes the route to peaceful resolution of Pak-India disputes - including the core issue of Kashmir - runs through comprehensive and meaningful dialogue, he said, adding, “…such dialogue is no favour to any party, it remains the inevitable precursor to peace across the region”.

The army chief said that Pakistan committed to such a dialogue, but only on the basis of sovereign equality, dignity and honour.

“Pakistan has totally rejected extremism and terrorist, the top commander said, adding, “We also refuse to be pulled asunder on issues of sect, ethnicity, caste or creed. The diversity of Pakistan is our strength”.

He asserted that the nation and its armed forces were totally united and focused towards its primary objective, that is, eradication and elimination of terrorism.

As a result of past and ongoing operations, Pakistan has eliminated almost all organized terrorist presence and infrastructure from its soil, he said, adding, “We are now going after the residual and scattered traces of this menace under the banner of Operation Radd-ul-Fasaad”.

He added that Operation Radd-ul-Fasaad was not merely an operation; it was a concept, a resolve and a commitment of the nation to eradicate tumult from its soil. “We are committed not to allow our soil to be used against any other country,” the army chief said.

In the passing out candidates, 31 cadets from FATA, 67 cadets from Balochistan and 6 Allied cadets from Kingdom of Saudi Arabia were included.

Addressing the passing out candidates, the army chief said that "...your training so far was focused on transforming the raw youth into a gentleman. But from now onwards, the actual period of professional training starts, along with honing of your leadership skills - You will hit the ground running and will soon be testing your mettle with the best of the bests".

"You are being commissioned in Pakistan Army at a time when Pakistan is facing enormous challenges both in conventional and sub-conventional domains. You will be operating in a high tech battlefield environment, involving inventions and innovations offered by science and technology," he said.

"Our enemies know, that they cannot beat us fair and square and have thus subjected us to a cruel, evil and protracted hybrid war. They are trying to weaken our resolve by weakening us from within," he highlighted.

Talking about Afghan issue, the army chief said: "We are also committed to peace and Intra Afghan reconciliation efforts in Afghanistan at all bilateral and multilateral forums. We sincerely believe that there will be no peace in Pakistan, if there is no peace in Afghanistan".

He added, "Our peace is linked, therefore, we must work in unison with our Afghan brothers to achieve this goal".