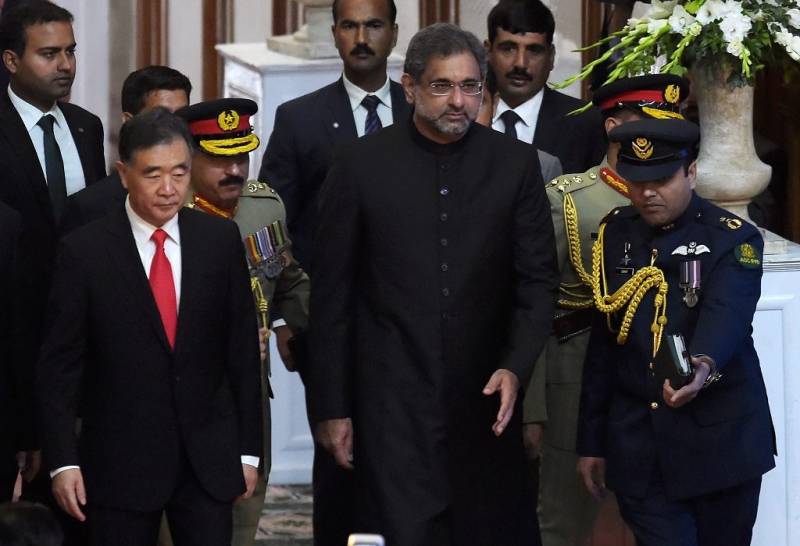 Addressing the nation on its 70th Independence Day, Abbasi said Pakistan desires positive and constructive relations with all countries based on sovereign equality.

India-Pakistan ties nosedived after a series of attacks last year, including the Uri strike, following the attacks, India boycotted the SAARC Summit, which was scheduled to be held in November last in Pakistan.

"Our government has invariably made efforts to initiate the process of meaningful dialogue and adoption of peaceful means to resolve the issues but unfortunately the expansionist designs of India have remained the main hurdle in this regard," Abbasi said as Chinese Vice Premier Wang Yang attended the celebrations as a "special guest" of the country.

Yang arrived in Pakistan on Sunday for the event.

Abbasi said that China and Pakistan have "always stood by each other in difficult times and their friendship will stand the test of time and grow with coming generations."

He called on the international community to play its role in resolving regional conflicts, particularly the Kashmir dispute between India and Pakistan in conformity with the UN resolutions to ensure durable peace in the region.

Abbasi, 58, was sworn-in as Pakistan's 18th prime minister on August 1 after the Supreme Court disqualified the incumbent Nawaz Sharif for dishonesty following the Panama papers scandal.

"The people of South Asia have suffered enormously in the last fifty years due to the festering conflicts. Until and unless those conflicts are resolved amicably the people of the region cannot achieve prosperity and progress," he said.

He termed terrorism as the biggest challenge confronting the world in the 21st century and highlighted Pakistan's "unparalleled sacrifices" in the fight against this menace.

In his address, President Mamnoon Hussain called for unity among the people for a developed Pakistan.

He said it is time to forget "personal grievances" and stand by the Constitution.

The day began with a 31-gun salute in the federal capital Islamabad along with a 21-gun salute in provincial capitals to mark the official Independence Day celebrations.

Major public and private buildings, roads and avenues have been decorated with national flags, portraits of the national leaders, banners and buntings to give a festive look.

The flag flew at 400 feet, the highest in South Asia. The 120x80 feet flag is also the largest in the history of the country, Pakistani media reported.

Bajwa was apprised of the recent "ceasefire violations from the Indian side and effective response by own troops." "There's no better way to celebrate independence than defending the country," he told soldiers.