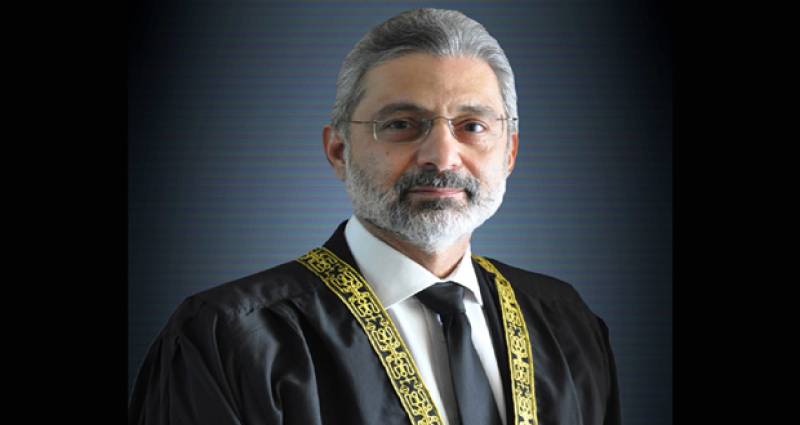 ISLAMABAD - The counsel for Supreme Court Judge, Justice Qazi Faez Isa told the apex court on Monday that the judge was not the beneficial owner of the flats under question.

The Supreme Court conducted the hearing of the case wherein Advocate Munir A Malik said his client had not accused any judge of discrimination or personal grudge.

Justice Isa had no objection over the full court or the judges who recused themselves, he added after a lawyer Ajmal Mahmood took the rostrum and raised objections over Justice Umar Ata Bandial’s presence in the bench, saying he should recuse himself from the hearing as a reference had been pending against him in the Supreme Judicial Council.

Justice Sajjad Ali Shah reprimanded the lawyer over his behaviour and attitude, while Justice Maqbool Baqar asked him to leave the rostrum but the counsel refused to do so, challenging the bench to charge him with the contempt of court.

The bench then summoned the president of SC Bar Association, who removed the lawyer from the rostrum.

During the hearing, Malik, the counsel for Justice Isa said Justice Isa's wife had purchased the first flat in 2004, while the petitioner became a judge after five years. His assets were verified when he was sworn in as a judge, he added.

The second and the third flats, he said, were purchased in 2013 by the offspring of Justice Isa, who was then discharging his duties as Balochistan High Court chief justice.

Munir A Malik said there was no allegation of corruption and dishonesty against him, he said and added that both Justice Qazi Faez Isa and President Arif Alvi had constitutional posts.

He said his client had reservations over the expenditures by some people enjoying high constitutional posts. A character assassination campaign against Justice Isa, who was supposed to become the SC chief justice in future, had been going on since May 28, he added.

Munir A Malik said the law firm of Justice Faez Isa was the top tax payer as in 2009, his annual income was Rs 36 million. When he became a judge, his annual salary was equivalent to his monthly income, he added.

He said both the Pakistan Tehreek-i-Insaf and the Muttahida Qaumi Movement had filed applications against Justice Isa in the aftermath of the Faizabad sit-in case verdict, delivered on February 26. Both the parties were allies in the centre and both had raised same type of questions in their respective applications, he added.

Later, the court adjourned the hearing till Tuesday when Munir A Malik said that he was not feeling well.

The reference filed against Justice Isa alleges that he acquired three properties in London on lease in the name of his wife and children between 2011 and 2015, but did not disclose them in the wealth returns.