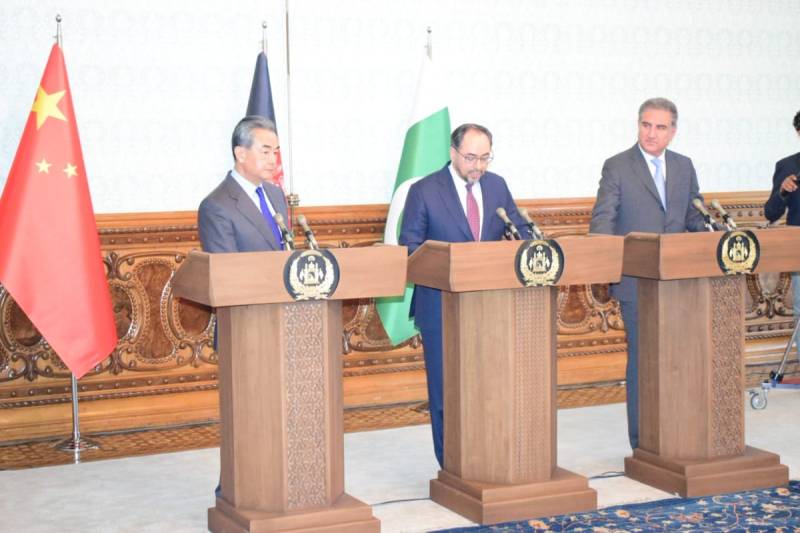 KABUL – Pakistan and Afghanistan on Saturday signed a Memorandum of Understanding (MoU) to step up fight against terrorism, on the sidelines of the trilateral summit in Kabul.

Speaking during a press conference alongside his Afghan and Chinese counterparts, Pakistan’s Foreign Minister Shah Mehmood Qureshi said he visited the Afghan capital to strengthen bilateral relations by bridging the trust gaps.

“Pakistan supports Afghan peace process,” he added while emphasizing that Islamabad would benefit from peace and stability in the neighbouring war-torn country.

FM Shah Mahmood Qureshi accompanied by senior officials from MoFA have left for #Kabul to attend #Pakistan #China #Afghanistan #trilateralmeeting.
The FM will meet #Chinese and #Afghan leadership during the visit.@mfa_afghanistan
🇵🇰🇨🇳🇦🇫 pic.twitter.com/9o8B1IhPiv

Afghanistan is hosting a three-way meeting with neighbours China and Pakistan to discuss peace as well as economic and counterterrorism cooperation.

Calling Afghanistan and Pakistan as strategic partners of China, Wang Yi said all three nations have agreed to step up fight against the terror groups. He also called on Taliban group to accept the Afghan government’s offer for peace talks.

In his turn, Afghan Foreign Minister Salahuddin Rabbani said the second round of trilateral summit was organized with the focus to expedite joint efforts for peace and stability in Afghanistan and the region.

Rabbani further added that the issues of fight against terrorism and political reconciliation in Afghanistan were discussed during the summit.

He expressed hopes that the second trilateral summit would yield positive results in coming weeks and months as he urged Pakistan to cooperate with the Afghan government in ongoing reconciliation efforts.

China has invested billions of dollars in infrastructure projects in Pakistan over the past five years as part of President Xi Jinping's global Belt and Road Initiative (BRI).

Chinese and Pakistani officials say they are considering expanding the bilateral China-Pakistan Economic Corridor, or CPEC, to Afghanistan, through road and rail links to promote connectivity and economic development in the war-ravaged country.

Pakistan says the expansion of CPEC to Afghanistan will give it better access to Central Asian markets for Pakistani exports.