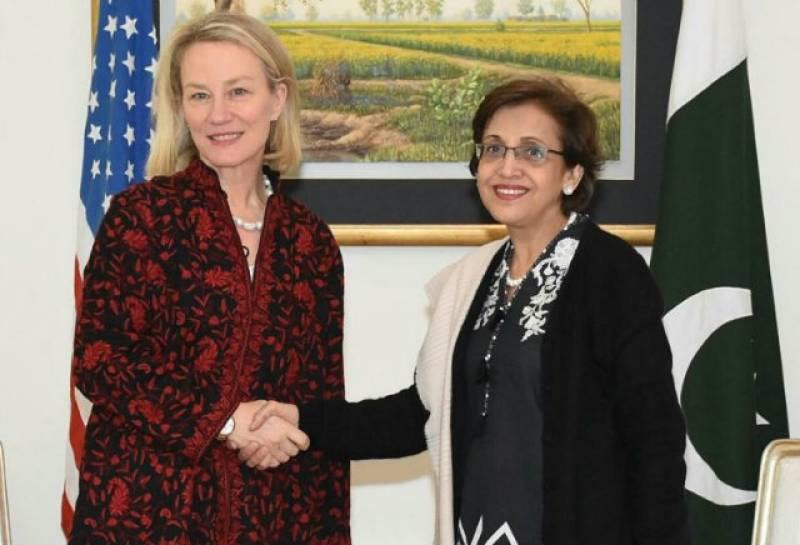 ISLAMABAD - US Acting Assistant Secretary of State Ambassador Alice Wells on Monday said Pakistan’s support was critical to the success of the US strategy for Afghanistan as an immediate neighbour and important country of the region.

The American diplomat arrived in Islamabad to hold meetings with Pakistani officials, the first visit from a senior American official since President Trump’s New Year Tweet in which he accused Pakistan of giving Washington nothing but “lies and deceit”.

In a meeting with the Foreign Secretary Tehmina Janjua in Islamabad , Ms Wells noted the importance of the longstanding bilateral relationship, and acknowledged Pakistan’s efforts in eradicating terrorism and conveyed the US desire to work with Pakistan in furthering the shared objectives of stabilising Afghanistan .

She also underlined the need for strengthening intelligence cooperation between the two sides to improve coordination in counter-terrorism efforts.

Foreign Secretary Tehmina Janjua, who, along with senior officials of the Ministry of Foreign Affairs, received Ambassador Wells, underscored that the relationship with the United States needed to move forward in an environment of mutual trust and respect.

The US delegation was apprised about recent counter-terrorism actions taken by Pakistan’s law enforcement agencies, which have contributed to "a visible improvement in the security situation of Pakistan ", the Foreign Office said. It was mentioned that these "comprehensive counter-terrorism actions would also contribute towards peace and stability in the entire region."

In the context of the regional situation, the foreign secretary expressed concerns on the continued use of Afghan soil by elements hostile to Pakistan’s stability. She added that strengthening border management mechanisms between Pakistan and Afghanistan was vital to addressing concerns relating to cross border movements.

"Early repatriation of Afghan refugees was also important for improving relations with Afghanistan ," she emphasised.

The foreign secretary reaffirmed Pakistan’s commitment to continue its efforts to promote peace and stability in the region.

The foreign secretary also drew the attention of the US delegation to recent irresponsible statements made by the Indian army chief and the pattern of escalation by India on the Line of Control and the Working Boundary, and condemned the Indian use of improvised explosive devices resulting in the martyrdom of Pakistani soldiers on Sunday. She asked the US side to advise restraint to India and stop its escalation tactics.

The two sides agreed that all initiatives owned and led by the Afghans for seeking a peaceful solution should be supported by regional countries.

The visit comes on the heels of a phone call from US Centcom Commander to the Pakistan’s army chief on Saturday in which he said Pakistan has suffered hugely due to great power contestation in the region.

The statement cited General Bajwa as saying Pakistan will not seek resumption of aid but expect honorable recognition of its contributions, sacrifices and unwavering resolve in fight against terrorism for peace and stability in the region.

Tension between the United States and Pakistan has grown over US complaints that the Afghan Taliban and Haqqani network that target American troops in Afghanistan are allowed to take shelter on Pakistani soil.

The US military’s Central Command said on Friday it was in “continuous communication” with Pakistan’s military, after Pakistan’s army said its top general “felt betrayed” at US criticism it was not doing enough to fight terrorism .

Trump’s administration announced the suspension of about $2billion in security aid to Pakistan over accusations Islamabad is playing a double game in Afghanistan .